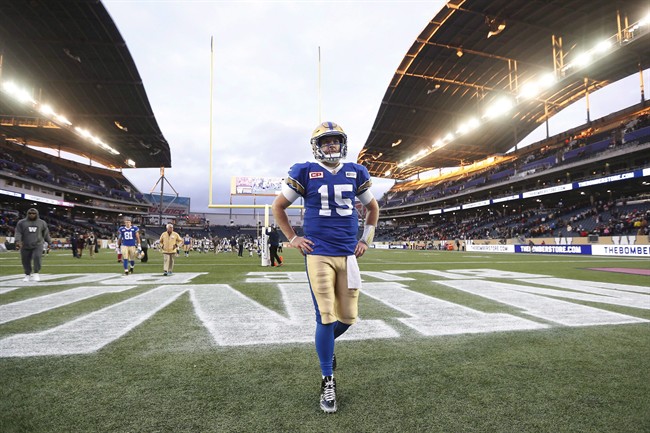 Winnipeg Blue Bombers’ quarterback Matt Nichols (15) walks off the field after the Ottawa Redblacks defeated them in CFL action, in Winnipeg, on October 24, 2015. The seven-year veteran was scheduled to become a free agent next month, and was re-signed by the Bombers on Tuesday, Jan. 5, 2016. (THE CANADIAN PRESS/John Woods)

The Winnipeg Blue Bombers have re-signed quarterback Matt Nichols to a one-year contract, just a month before he was to become a free agent.

Nichols came to Winnipeg in September through a trade with the Edmonton Eskimos. The seven-year veteran started seven games in 2015 with Winnipeg, going 149-248 for 1,757 yards, and tossing ten touchdowns.

“Getting this deal done was a very important component to our roster heading into 2016,” said Blue Bombers general manager Kyle Walters. “Matt is an extremely valuable asset to our organization, and provides stability and depth at a very key position.”