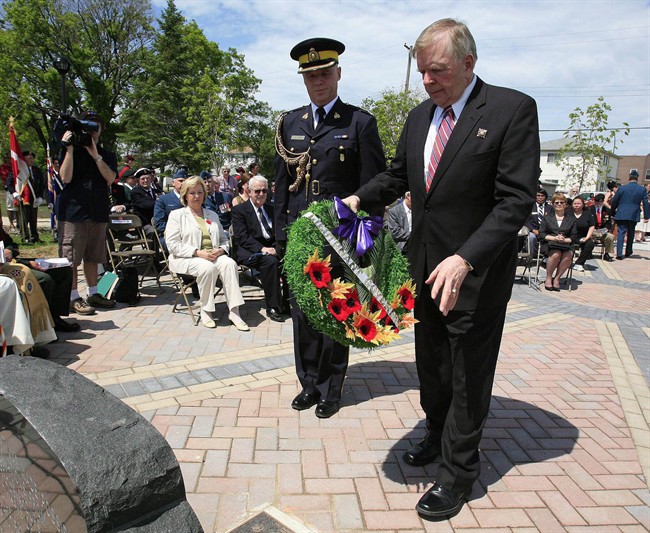 Manitoba lieutenant-governor John Harvard places a wreath for Sgt. Tommy Prince at a ceremony for the deceased soldier in Winnipeg on Sunday June 10, 2007. A spokesman for the federal Liberal party in Manitoba said Harvard, who was 77, died Saturday but did not immediately have further details. (THE CANADIAN PRESS/John Woods)

The Prime Minister’s Office confirmed Harvard died. A spokesman for the federal Liberal party in Manitoba said Harvard, who was 77, died Saturday but did not immediately have further details.

He was installed as Manitoba’s 23rd Lieutenant Governor shortly after leaving federal politics and held the post until his term ended in 2009.

Before politics, Harvard was a broadcast journalist and worked for CJOB radio in Winnipeg and later with the CBC.

Trudeau tweeted Saturday that Harvard “served the people of Manitoba with distinction,” thoughts that were echoed by Selinger.

“He had true passion for a better Manitoba,” Selinger tweeted.

Former prime minister Paul Martin appointed Harvard as parliamentary secretary to the minister of international trade, a position he held until his retirement from federal politics.

Harvard’s appointment to the post of lieutenant governor cleared the way for former Winnipeg mayor Glen Murray to run in Harvard’s former riding in the 2004 federal election, a race Murray ended up losing.

When Harvard was awarded an honourary degree by the University of Manitoba in 2005, the school’s dean of arts said Harvard’s life read “as a quintessential Canadian success story of immigrant heritage.”

“His father came to Canada from Iceland in 1903, and his mother was born in Canada shortly after her parents immigrated from Iceland,” Dr. Richard Sigurdson said in his citation during the 2005 convocation.

“Coming from such a large family gave him valuable early lessons in the analysis of human dynamics, something which gave him an advantage in his chosen profession of broadcast journalism, where he became well-known for his political insight, investigative skill and compassion for the plight of the disadvantaged,” Sigurdson added.

Harvard was born in Glenboro, Manitoba, the 11th in a family of 14 children.