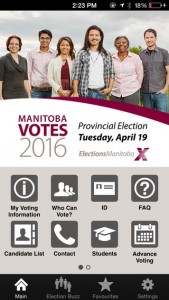 A new mobile app has been launched ahead of this spring’s provincial election.

Elections Manitoba has rolled out the Manitoba Votes 2016 app, allowing Manitobans to connect with up-to-date election information before heading to the polls.

“Our new app provides mobile users with quick access to their voting information, including a listing of candidates in their electoral division, voting location and key dates. Users can also read about and apply for jobs available during the election,” said Shipra Verma, Manitoba’s chief electoral officer.

The app was developed by Purple Forge and is available as a free download on Apple, Android and BlackBerry devices.