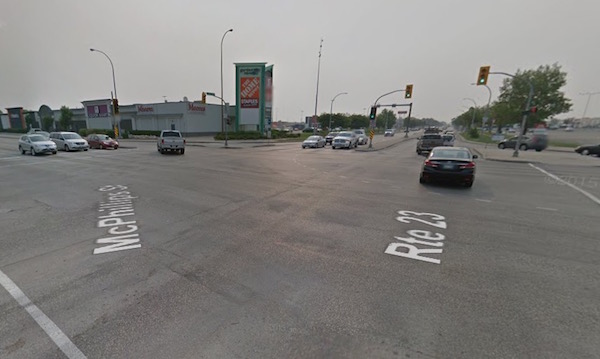 Leila and McPhillips is Winnipeg’s worst intersection for collisions, according to MPI. (GOOGLE STREET VIEW)

The most accidents in Winnipeg occur at the intersection of Leila Avenue and McPhillips Street, according to new data from Manitoba Public Insurance.

The public auto insurer has released the top five intersections where the most collisions occur, tallying nearly 10,000 of them between 2005 and 2014.

A new two-year pilot program designed to enhance motorists’ awareness at these high-collision intersections launched on Thursday with MPI and its partners, including the City of Winnipeg, Winnipeg Police and CAA Manitoba.

A new awareness campaign is also rolling out, featuring a mix of signage at the intersections and dedicated police enforcement.

Signage alerting motorists that they are approaching a high-collision intersection with a secondary message of “Don’t Follow Too Close” will be placed on all approaches at Kenaston/McGillivray and Leila/McPhillips for the duration of the pilot project.

MPI will also fund special enforcement at Kenaston/McGillivray and Bishop Grandin/St. Mary’s for the first year of the project.