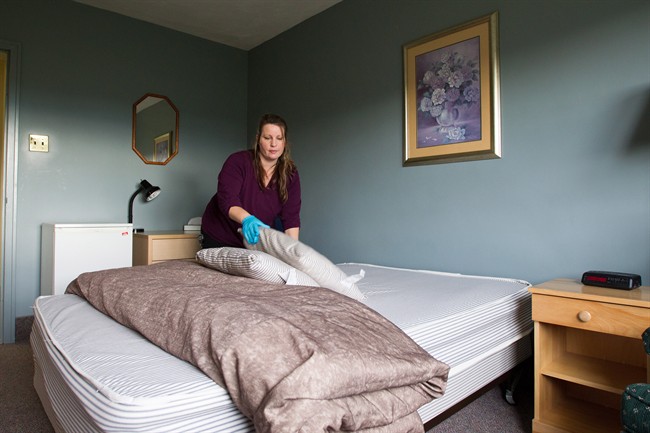 Civilian employee Lisa Goodsell cleans on of the barracks at CFB Kingston in Kingston, Ont., on Monday Nov. 23, 2015. Several of the barracks were used by Syrian refugees. (THE CANADIAN PRESS/Lars Hagberg)

A benefit concert held Tuesday night exceeded the fundraising goal of a local organization to assist newcomer refugees to Winnipeg.

“We had a donation station set up at the Park Theatre and could provide live updates to the GoFundMe page as concertgoers made their donations,” said fundraising co-chair Ian Mattey.

“And that doesn’t even include ticket-sale and silent-auction proceeds which are still to be counted.”

About 350 people packed the theatre to hear sets by DJ Co-op, Sweet Alibi and The Bonaduces, who donated their talents for the concert.

“We have all the funds we set out to collect for the first two Syrian refugee families — months earlier than expected. It happened right at the time we hope to confirm sponsoring a third refugee family next Sunday, at which time we will need to increase our fundraising goal to cover that.”

Mattey says in order to sponsor the third family, an amendment by the Churchill Park United Church to the original agreement with the South Osborne Syrian Refugee Initiative will need to be made. Both sides will meet during next Sunday’s service to vote on a resolution.