Home » The Canadian Press » Crash Victim Who Crawled Up Snowbank to Save Daughter May Not Walk Again: Friend

Crash Victim Who Crawled Up Snowbank to Save Daughter May Not Walk Again: Friend 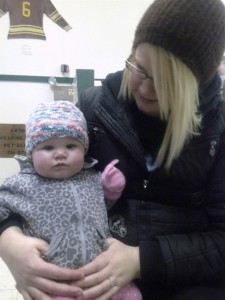 Kristen Hiebert and her daughter Avery are shown in a handout photo. Donations are pouring in to a GoFundMe page for Hiebert, a Manitoba woman who spent a painful and frigidly cold night in a ditch, huddled for warmth with her young daughter after they were thrown from a vehicle in a crash. (THE CANADIAN PRESS/HO)

WINNIPEG – A friend says an injured Manitoba woman who crawled up a snowbank to seek help after spending overnight in a frigid ditch trying to keep her young daughter warm may never walk again.

Kristen Hiebert and four-year-old Avery were going home on Sunday night when their car slid off a rural highway near a bridge and rolled down a steep slope to the frozen Souris River.

The problem was they were hidden from the road.

Thrown from the car into the snow, the pair huddled together for 10 hours as temperatures dipped to -23 C. At dawn, Hiebert dragged herself up the snowbank despite a broken leg, broken neck and severe frostbite to her bare feet.

Hiebert was found by a passing motorist, who just happened to see her hand as she clung to the guardrail, and was airlifted to a Winnipeg hospital.

Her daughter is in stable condition, but a close friend said Hiebert has a long recovery.

“She has lots of broken bones, which can be healed, but it’s the frostbite that’s on both of her feet, as well as her inner leg,” Morgan Campbell said Thursday. “Those are very touch and go. We’re not sure if they’re going to come back or not.

“If she’s not going to walk again, we’re looking at years.”

Campbell set up a GoFundMe page for Hiebert — a single mom who worked two jobs cleaning homes and a hotel — hoping to offset some of the costs her family faces staying by her side in Winnipeg.

Within 24 hours, donations reached $29,000. The generosity of strangers will help Hiebert focus on healing without worrying about supporting her daughter, Campbell said.

“She’s in tearful disbelief,” she said. “I can’t heal her bones and I can’t bring her feet back. This is what we can do. I’m so shocked and amazed, honoured and humbled that people have stepped up.”

It’s not clear what caused the crash. Campbell said Hiebert doesn’t remember anything, but Campbell said the roads were icy at the time.

First responders from the nearby town of Ninette say other motorists had pulled over to help by the time volunteer firefighters arrived. The drivers were trying to warm Hiebert and Avery in the back of an SUV.

“It was in rough shape.”

The strength it took to make it through the night, hearing cars pass overhead while she tried to keep her daughter warm, is hard to imagine, Campbell said. To make the excruciating decision to leave Avery and claw her way up the ditch, through incredible pain, took extraordinary strength and courage, she suggested.