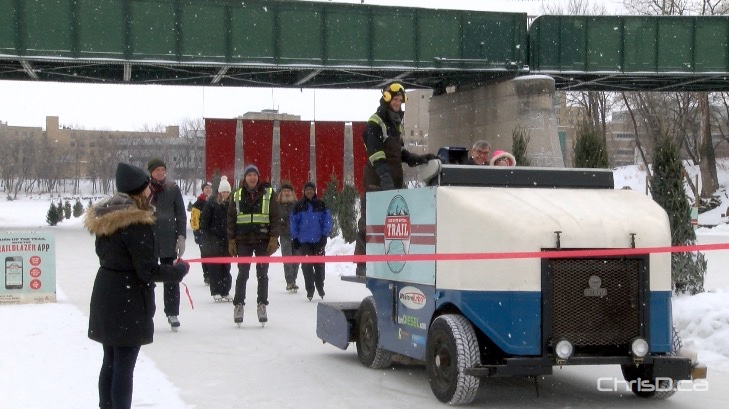 WINNIPEG — It’s what Winnipeg winter enthusiasts have been patiently waiting for since December and now the Red River Mutual Trail is open for business.

“We’re super excited that we finally have the opportunity to say that the river trail is here and that it’s open,” said Chelsea Thomson with The Forks on Thursday.

“The mild temperatures in December had quite a few people worried, but we’re happy that January prevailed. Those temperatures did dip and now it’s beautiful out and the river trail is opening.”

Thomson says the earliest the trail has been open was New Year’s Eve, and the latest being the end of January, so opening the third week of the month isn’t particularly unusual.

During its roughly 7-9 week run, the trail will host the Subaru Iron Man Curling Bonspiel, events during Festival du Voyageur, as well as the inaugural Winter Wind Derby.

Skaters can glide 1 km from The Forks to Queen Elizabeth Way on the Red River. Crews will next begin working to extend the trail to Churchill Drive and then to the St. Vital Bridge.

Skaters can continually check TheForks.com or follow @RRMTrail on Twitter for which access points are open to the trail as it’s groomed further down either the Red or Assiniboine rivers.

Skate rentals are available inside The Forks for $5 (adults) and $3 (children and seniors).

← Previous: Crash Victim Who Crawled Up Snowbank to Save Daughter May Not Walk Again: Friend Next: RCMP Officer Dragged as Woman Flees from Manitoba Detachment →
Tags: The Forks | Winnipeg | Winter