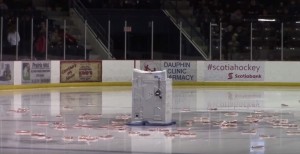 Hockey fans throw kubasa onto the ice as part of Ukrainian Festival Night at the Dauphin Kings hockey game on Saturday, January 23, 2016. (YOUTUBE)

Some hockey fans in Dauphin on Saturday may have thrown out an arm after the inaugural Ukrainian Kubasa Toss.

The fun event at Credit Union Place was part of the Dauphin Kings’ Ukrainian Festival Night.

About 1,300 fans packed the arena, but didn’t all toss sausage onto the ice. Actually, none of them did. It’s against Ukrainian culture to throw food, so pieces of garden hose were placed into brown meat-wrapping paper to give the illusion.

Organizers sold the packages for $1 each, with the chance for fans to win prizes by throwing them into a washing machine at centre ice.

Real kubasa was sold at the arena’s canteen instead, along with other Ukrainian fare to keep up with the city’s reputation. Dauphin also hosts the National Ukrainian Festival every summer.