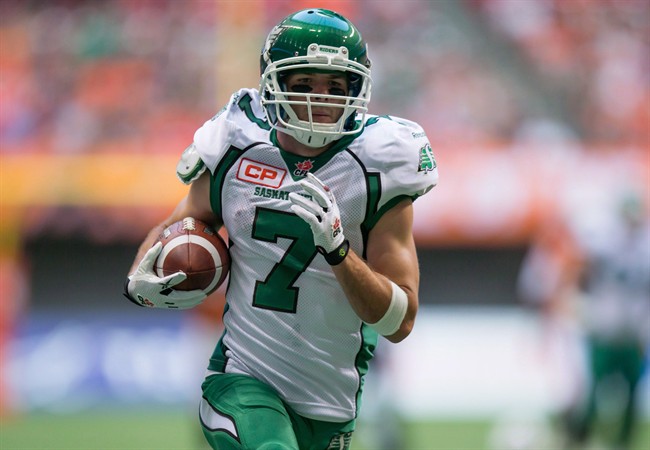 Saskatchewan Roughriders’ Weston Dressler scores a touchdown against the B.C. Lions during the first half of a CFL football game in Vancouver, B.C., on Friday July 10, 2015. The Blue Bombers signed veteran slotback Weston Dressler on Tuesday. (THE CANADIAN PRESS/Darryl Dyck)

The Winnipeg Blue Bombers made a big off season move Tuesday with the signing of veteran CFL receiver Weston Dressler.

Having spent eight seasons with Saskatchewan, Dressler comes to Winnipeg under a two-year contract and the title of the league’s most productive receiver since he was drafted in 2008.

“Adding a veteran player with his skillset was really a no-brainer for us,” said Blue Bombers general manager Kyle Walters. “We were all immediately interested in adding him to our offensive lineup, and we’re very excited to have Weston on our side moving forward.”

The 5-7, 180 pound Bismarck, ND product is a two-time CFL All-Star, and has been named a Division All-Star on four occasions. He has accumulated 7,797 receiving yards on 539 receptions, with 50 receiving touchdowns.

The 30-year-old has five 1,000-yard seasons and 25 career 100-yard receiving games. Including his work on special teams, he has tallied 55 career touchdowns in the CFL. He’s played in seven career playoff games, and two Grey Cup’s, winning in 2013.