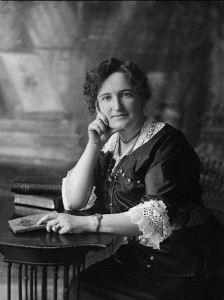 Nellie McClung is shown in an undated photo. (THE CANADIAN PRESS/National Archives of Canada/C.Jessop)

WINNIPEG — On the day of the 100th anniversary of Manitoba recognizing a woman’s right to vote, the Progressive Conservatives are advocating for a pioneer of the movement to be honoured on Canada’s banknote.

Opposition leader Brian Pallister says Nellie McClung is “a most fitting choice for an honour like this.”

Pallister sent a letter to Governor of the Bank of Canada, Stephen Poloz, on Thursday, reading in part:

“I am writing to express my support for placing a woman on one of Canada’s banknotes. This would be a visible and important expression of the role women have played in Canada’s life and history… I can see no better representation of a female pioneer and democratic icon on a Canadian banknote than Nellie McClung’s image. This would be a vivid visual reminder to all Canadians, young and old, of how we hold democracy dear and everyone’s place in it.”

Legislation was passed 100 years ago today to give most women in Manitoba the right to vote — becoming the first province in Canada to do so.