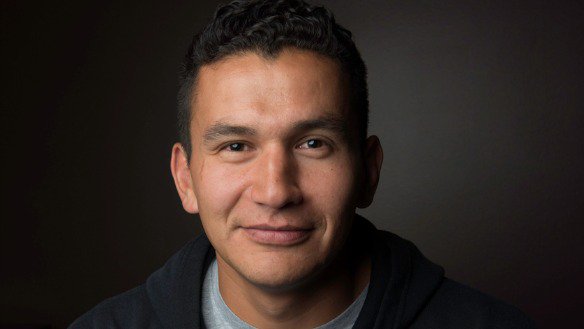 WINNIPEG – Broadcaster and author Wab Kinew is running for a seat in the Manitoba legislature, providing a boost for the NDP government that has struggled with low poll numbers and the departure of longtime members.

Kinew said Tuesday he is seeking the NDP nomination in the Fort Rouge constituency in Winnipeg — the seat held by former finance minister Jennifer Howard, who announced last week she will not seek re-election.

“But I feel passionately that now is the time for me to try and do what I can to ensure that Manitoba continues to be a progressive place — a place where anybody can achieve and where everybody has an equal shot.”

Political analyst Paul Thomas said Kinew’s decision is a setback for the Manitoba Liberal Party, because its leader, Rana Bokhari, is trying to get her first legislature seat by running in that constituency.

“It’s impressive that (the NDP) could pick up a star candidate given where they stand in the polls,” Thomas, a professor emeritus of political science at the University of Manitoba, said Tuesday.

“A star candidate, who I think would be very engaging in town hall meetings and on doorsteps with voters, makes it tougher for Rana Bokhari to get her first election victory.”

Several opinion polls have suggested NDP support has plummeted since the government raised the provincial sales tax in 2013. Recent polls suggest the party is 20 points behind the Opposition Progressive Conservatives and very close to the Liberals.

Kinew, who is also the associate vice-president for indigenous relations at the University of Winnipeg, could win the NDP support from the indigenous community, especially in central Winnipeg and the province’s north.

Premier Greg Selinger stood beside Kinew Tuesday and called his candidacy a boost for the party.

“Wab, I believe, is a game-changing candidate because of his record of service and his profound respect for people in the process of reconciliation,” Selinger said.

Kinew is author of the bestselling book “The Reason You Walk.” He also worked as a journalist with the CBC and hosted the documentary series “Eighth Fire.”

He said Tuesday he wanted to “step forward as a voice for renewal”, and was later asked whether he had leadership aspirations.

“No. My aspiration is to be a leader for the people of Fort Rouge, to speak to the constituency, hear what matters to them.”

Bokhari issued a one-line written statement Tuesday, in which she said, “I like Wab Kinew, but residents of Fort Rouge know a vote for Wab is a vote for (Premier) Greg Selinger.” Audrey Gordon is carrying the Tory banner in the constituency.

The Liberals have only one legislature seat and have been trying to emerge from the political wilderness for more than two decades. The party was buoyed by a surge in opinion polls. But it continues to struggle financially and lacks the organizational depth of the NDP or Progressive Conservatives, Thomas said.

“It’s going to be hard to translate that support into votes unless the NDP does something wrong or (Tory leader) Brian Pallister makes a blunder of some kind.”

Bokhari’s lack of a legislature seat has also been a drain on party finances. Without a legislature member’s salary, she has been paid by the party since becoming leader in 2013.