Manitoba Liberals Would Use Some Road Money for Arts Infrastructure 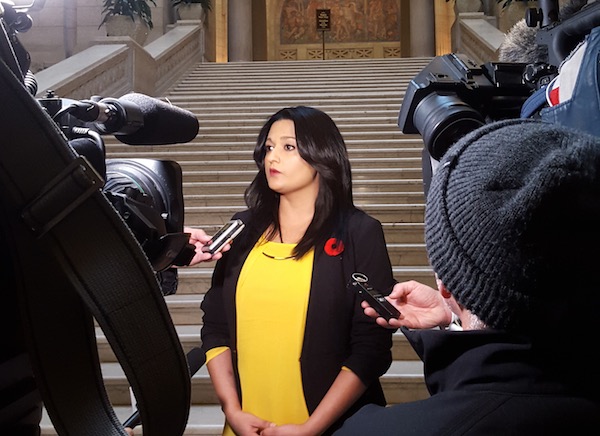 WINNIPEG – Manitoba Liberals promised more money for the arts Thursday, but the NDP government said the Liberal promise was ill-informed and appeared to contain nothing new.

Liberal Leader Rana Bokhari announced a plan to set up an advisory council on the arts, which would help the government shape a new policy on arts and culture.

She also said a Liberal government would use some of the infrastructure money normally spent on roads and bridges to build or improve cultural facilities.

“Infrastructure doesn’t only mean pipes, bridges, highways and everything else,” Bokhari said.

Bokhari would not say how much money she would divert. The decision would follow input from her proposed advisory council, she said, if the Liberals win the April 19 provincial election.

Tourism and Culture Minister Ron Lemieux said Bokhari appeared to be unaware that the province already launched a review of the arts and culture industry, including how it is funded, last December.

He said the province has already committed to new cultural infrastructure, including a large-scale addition to the Winnipeg Art Gallery and a new two-story conservatory and garden at Assiniboine Park.

“It seems like (the Liberals) are lacking a lot of information in some of the policy directions in what they’re trying to do,” Lemieux said.

“All this tells me is that they’re not ready for prime time at all. Zero.”

Bokhari admitted she was not aware of the “details” of the government review, and would not say whether she would maintain it if elected.

The Liberals, who have only one seat in the legislature but who have risen sharply in opinion polls, have already been accused of putting out announcements short on detail.

Bokhari recently promised to freeze rents across the province for two years if elected. Landlords were caught off-guard by the announcement and said Bokhari should have consulted them on the restrictions they already face when they seek an increase.

The Liberals have also yet to indicate how they will pay for tens of millions of dollars in election promises they have made so far. Bokhari has said a full accounting will be issued before the election campaign formally begins in March.