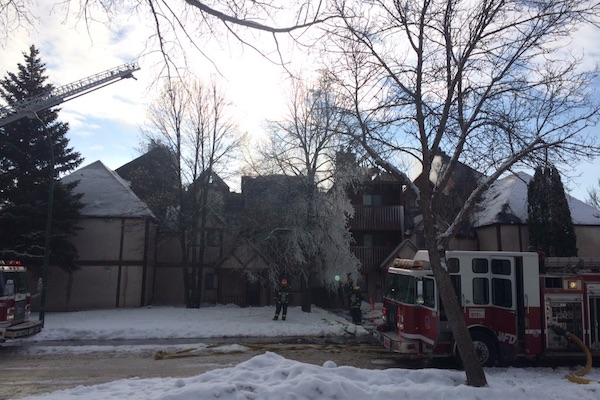 Tudor Village at 160 Ulster Street in Fort Richmond is considered a total loss after a fire on Friday, February 5, 2016. (BRAEDEN JONES / METRO WINNIPEG)

A fire at a townhouse complex in south Winnipeg completely destroyed the building on Friday.

Crews were called to Tudor Village in the 100 block of Ulster Street in Fort Richmond at around 9:30 a.m.

Smoke could be seen billowing over the area for nearly an hour as flames attacked the roof of the complex.

The building includes about 20 townhouses, all of which were damaged.

Flames could still be seen coming from the structure as of 11:30 a.m.

The Winnipeg Fire Paramedic Service says no one was in the building at the time and no injuries were reported.

The structure is considered inhabitable.