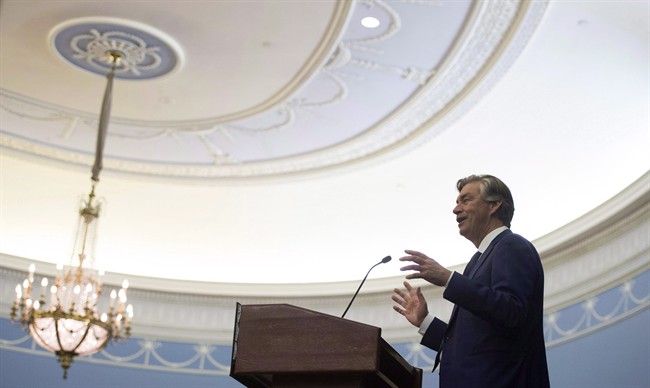 Canada’s Ambassador to the U.S. Gary Doer speaks to the Economic Club of Canada in Ottawa on Dec. 2, 2015. A college kid named Gary Doer had a plan to leave school for a while, get some work experience, then return to finish his degree in political science. His political education wound up lasting 46 years and taking him far off-campus — to a youth-detention facility where he managed conflicting constituencies; to union leadership; the provincial cabinet; three terms as Manitoba premier; and finally to an ambassadorship in Washington. (THE CANADIAN PRESS/Sean Kilpatrick)

WASHINGTON – A college kid named Gary Doer had a plan to leave school for a while, get some work experience, then return to finish his degree in political science.

His political education wound up lasting 46 years and taking him far off-campus — to a youth-detention facility where he managed conflicting constituencies; to union leadership; the provincial cabinet; three terms as Manitoba premier; and finally to an ambassadorship in Washington.

He received something slightly less conventional than a diploma when he completed his final chapter this week: Doer sent some farewell emails; left his office overlooking Capitol Hill; and, on his way out, got tributes from the floor of both houses of the U.S. Congress.

“Ambassador, you have put a lot of pucks in the net,” said Sen. Amy Klobuchar. “Put your hands in the air to celebrate your work. In hockey parlance, you have scored for your great country of Canada.”

The imagery was fitting. A hallmark of Doer’s speaking style is sports metaphors.

He was tickled by an element of the speech that made a news headline in the senator’s home state of Minnesota — her revelation that they shared a common hero in U.S. football star-turned-Winnipeg-coach Bud Grant.

“That’s the stuff they don’t teach you in diplomatic boot camp,” Doer said in an interview.

“Diplomacy can be cheering for the same NFL football team… Relating to people — in anybody’s business…. you get stuff done through relationships.”

The bipartisan relationships paid off on several issues. Not on the Keystone XL pipeline, which became frozen in a Democrat-versus-Republican no-man’s-land.

His biggest day-to-day preoccupation of the last six years?

As it turned out, his last formal correspondence with Congress was a letter reassuring committee members that Canada is carefully screening Syrian refugees.

When your neighbour remains rattled by terrorist attacks, operates a border with you, and buys 70 per cent of your exports, security conversations are a daily reality.

“This is every day. Security, every day,” said Doer, whose successor David MacNaughton arrives in a few weeks.

“New people get elected, new facts have to be presented. There’s new concerns always raised. We’re dealing with an uncertain time in some places… It’s important for us to use facts to provide certainty to our neighbours.”

He made a tongue-in-cheek reference to Wisconsin’s Scott Walker — a Great Lakes governor — entertaining the idea of a border wall: “This is what I have to deal with. You have Lake Superior already. You’ve gotta get a six-foot wall that’s better than Lake Superior?”

Doer believes security even played a role in his appointment.

In 2009, most people assumed Stephen Harper reached across the ideological aisle for a lifelong NDPer to encourage decent relations with Democrats.

Few noted Doer was on friendly terms with Obama’s first homeland-security secretary, Janet Napolitano, from their days as premier and Arizona governor.

She’d just repeated the old falsehood about the 9-11 terrorists entering from Canada — and debunking that die-hard canard is part of a Canadian ambassador’s job description.

As a Harper appointee, he occasionally drew jeers from progressives — for promoting Keystone XL, and to a lesser extent for advocating the mission against ISIL.

But one of his best friends gets frustrated when he hears people describing Doer as ideologically agnostic.

Winnipeg psychiatrist Keith Hildahl calls him a centre-left politician, who believes in a bigger role for aboriginal people in public life, supports business, but who also banned corporate and union political donations in Manitoba.

”Gary brought a value system into everything that he did,” Hildahl said of Doer, with whom he still shares Winnipeg Jets season tickets.

Another friend, Bill Armstrong, called Doer a compromise-builder dating back to his first career. He recalled him resolving a generational clash at the detention home, between old-school guards and young, university-educated baby boomers.

Doer got promoted. He never returned to school.

Now he’ll co-chair the advisory committee to a Canada-U.S. think-tank.

In a bit of career symmetry, Doer’s last big meeting as ambassador, a few days ago, involved hosting Secretary of State John Kerry in Quebec City — the same city where he attended his first premiers’ conference.

Being there with the surviving members of the original military special-forces unit, the Canada-U.S. Devil’s Brigade, as they received congressional gold medals.

He’s kept a framed copy of the bill granting their medals. He’ll also recall the old men’s grisly tales about infiltrating enemy lines and springing some nasty surprises upon Nazis.

“We’re talking special forces now in Iraq and Syria. The model was started (with them in the Second World War),” Doer said.

“I’ve been in the Oval Office, the Pentagon — been to all kinds of historical places and met very interesting people…

“But that was the most gratifying moment.”