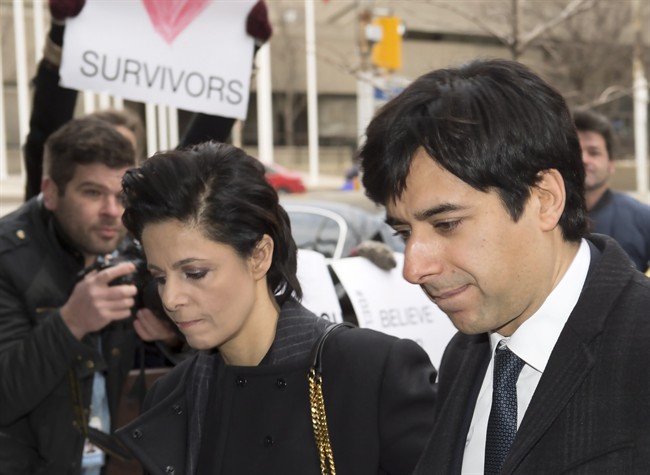 Jian Ghomeshi walks in front of protesters as he arrives at a Toronto courthouse with his lawyer Marie Henein (left) for the third day of his trial on Thursday, Feb. 4, 2016. (THE CANADIAN PRESS/Frank Gunn)

There will be high drama in a Toronto courtroom for another couple of weeks. It’s the trial of Jian Ghomeshi for sexual assault, and it has all the elements necessary for a movie of the week, with a couple of additional twists.

As Canada welcomes thousands of refugees from war-torn Syria, the man in the prisoner’s dock was once a scared young kid from Iran. He became a star in his new country, and then suffered a spectacular fall from grace. Defending Ghomeshi is a woman who is well on her way to becoming Canada’s best known criminal lawyer, Marie Henein.

In October of 2014, shortly after Jian had left the CBC building for the last time, Marie was speaking to a lawyers’ gala dinner in Toronto. What she said was worthy of a writer like Aaron Sorkin. “We represent people who have committed horrible acts of violence, acts of depravity and cruelty — or as Jian Ghomeshi likes to call it — foreplay.” Six days later, Marie was hired to try and keep this same guy out from behind bars.

Like Ghomeshi, Marie is an outsider. She was born in Egypt in the mid-1960’s, not a time or place that was known for strong independent women. Marci McDonald, one of Canada’s best magazine writers, did an excellent profile of Marie Henein in the most recent issue of Toronto Life.

She was a protege of the late Eddie Greenspan, who was Canada’s best-known criminal lawyer for decades. The merits and details of the case against Jian Ghomeshi are best left for the eyes and ears of the man hearing the case, Justice William Horkins. But one thing is already abundantly clear about women trying to get legal satisfaction in such matters in 2016. Very little has changed. It is still basically “He said, she said”, and it’s not really about justice.

It’s about winning, is it not?