Race Across Wintry Manitoba a Test of Human Endurance and Resilience 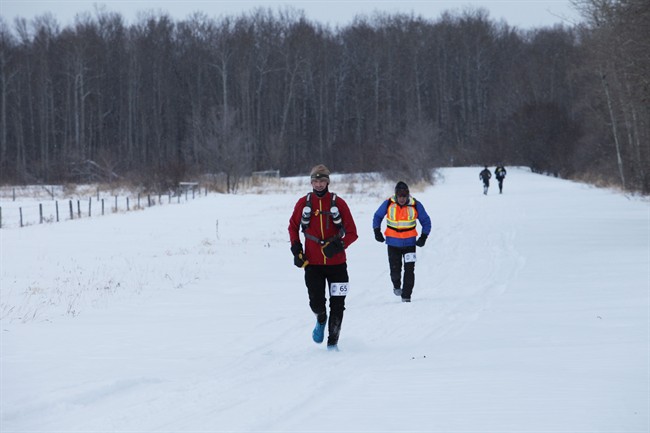 Participants compete in ‘Actif Epica’ in this undated handout photo. For the fifth year, at least 50 participants will head out into the flat, bald wilderness of the Trans Canada Trail Feb. 13, by foot or on a bike, ready to battle the elements over 24 hours. Welcome to Actif Epica — a 130-kilometre race through rural Manitoba in February — testing the ability to embrace, and yet defeat, winter at the same time. (THE CANADIAN PRESS/HO – Canadian Forces, Government of Canada/Dwayne Sandall)

WINNIPEG – After enduring more than 100 kilometres on her bike crossing Manitoba countryside, through blowing snow and an unrelenting February wind, Andrea Tetrault could no longer feel her hands or feet.

She had reached the city limits of Winnipeg but still had about 20 kilometres to go.

“It was a horrible feeling,” Tetrault said. “Your hands are like blocks of wood. You can’t feel anything. You know that’s not good for you.”

Somehow the 46-year-old mustered every last bit of strength for the home stretch — pedalling, shifting gears and braking without being able to feel any of the motions.

Welcome to Actif Epica — a 130-kilometre race through rural Manitoba in February — testing the ability to embrace, and yet defeat, winter at the same time.

For the fifth year, at least 50 participants will head out into the flat, bald wilderness of the Trans Canada Trail Feb. 13, by foot or on a bike, ready to battle the elements over 24 hours.

“Mentally, it’s really tough,” said Tetrault, who has done the race three times. “You’re looking at landmarks on the horizon that, after two hours, don’t seem any closer because it’s so slow.”

The race started in 2012 with only 32 brave souls. Last year, it drew just over 100 people. Some have come from as far away as Brazil and California to take part.

The hardy participants take a bus to St. Malo, south of Winnipeg, where they start at 7 a.m. They go north to the Red River floodway along the Trans Canada Trail and across open stretches of prairie for 100 kilometres before they hit the outskirts of Winnipeg.

Participants are warned that, although the route is flat, it is far from easy. There are steep climbs across creeks and rivers. The trail surface can vary and include ice, snow and frozen gravel. Snowdrifts in places may exceed one metre.

Runners have 25 hours to finish while the cyclists have 24.

Participants have to carry a GPS, extra clothing, food and a “whistle on string around neck to call for help, because your mouth is too numb to yell,” organizers say on the race website.

And as if 130 kilometres wasn’t enough of a challenge, this year organizers have tacked on another 30 kilometres for those gluttons for punishment.

Organizer Dwayne Sandall said the event is not for the faint of heart. Not everyone who starts the race crosses the finish line, he said.

“They go into it knowing it’s not going to be easy. Even the people who end up dropping out, they’re never really despondent. They’re like, ‘I learned a lot about myself today.’

“It’s a learning experience if you finish or you don’t finish. You learn what you’re really capable of.”

Most who have been forced to drop out of the race halfway through have come back the following year, Sandall said.

“You have to be as relentless as the conditions,” he said. “Your body is telling you to stop, but it’s actually your mind.”

It’s hard for many to explain what drives them to sign up for such a gruelling race. For Tetrault, the challenge of the race makes finishing it that much sweeter.

“The joy of it doesn’t really sink in immediately. You’re happy to be finished, but it’s kind of like when you’re banging your head against the wall — it feels really good when you stop,” she said with a laugh.

“We can challenge ourselves to extraordinary things that we didn’t think were possible. It’s hard and that’s part of why you do it. If it was easy, everybody would do it and then it wouldn’t be so cool.”

If cheering the runners and cyclists on is more your thing, the midway point is the community centre in Niverville, Man. Participants stop there anywhere between 11:30 a.m. and 8 p.m. The finish line is in downtown Winnipeg at The Forks where the earliest someone has finished has been 10:30 p.m.