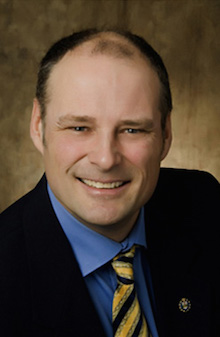 NDP MLA Drew Caldwell is seeking re-election in his constituency of Brandon East.

“In this election, the people of Brandon East face two distinct visions for our community: our positive plan to continue to build our community and support the middle class and seniors, or the cuts and privatization promised by both Rana Bokhari’s Liberals and Brian Pallister’s Conservatives,” Caldwell said in a release.

Caldwell was first elected to the Manitoba Legislature in 1999. Prior to his provincial service, he was a three-term city councillor for the Rosser ward in Brandon.