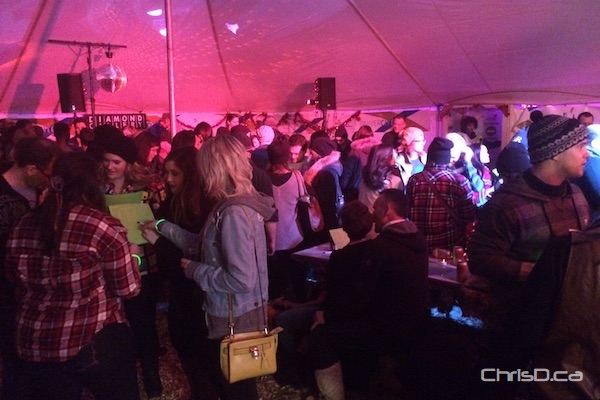 People mingle inside the tent at the first ever Singles Night at Festival du Voyageur on Sunday, February 14, 2016. (MICHELLE BAILEY / CHRISD.CA) 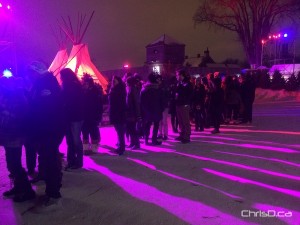 Hundreds of people wait in line to get into the Singles Night tent at Festival du Voyageur on Sunday. (MICHELLE BAILEY / CHRISD.CA)

While hoards of people were inside a warm tent playing games like “human bingo” with hopes of meeting Mr. or Ms. Right, just as many were standing in the cold outside, waiting to get in and take part in the inaugural singles night at Festival du Voyageur on Sunday.

“Tonight, I’m the seventh wheel with my friends who are couples and I am anxious to get in there and have some fun,” said Anna Klassen, who was willing to wait behind at least 100 people for her turn to join the festivities.

Amanda Nitychoruk was even further behind in line, but that wasn’t going to deter her either.

“The whole idea of having an event like this that is geared towards people who are single and looking for something to do on Valentine’s Day is great,” she said. “It’s not like you’re just going to the bar because it’s part of Festival and is something completely different.”

Remi Authier was one of the lucky ones who managed to get inside soon after the venue opened. Having just moved to Winnipeg, Authier said that for people who don’t have families and want to be part of Festival during the evening hours, this event is a perfect fit.

“This is such a great idea and you can see people are really enjoying it,” said Authier. “The crowd inside and the line-up outside is proof that the organizers have come across a good addition to what is already a popular winter event.”

Organizers of Festival du Voyageur said they will review how the evening went after the event ends February 21 to determine if it will become a fixture of future festivals.