Night Hunting in the Sights of Manitoba Wildlife Federation 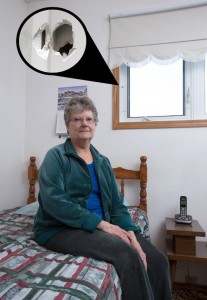 Doreen Sliworsky sits on her bed where a bullet was fired through a window frame by night hunters in rural Manitoba. (MANITOBA WILDLIFE FEDERATION)

The Manitoba Wildlife Federation is calling for stricter laws and more enforcement to combat spotlighting.

Ranchers Victor and Doreen Sliworsky of Winnipegosis were awoken September 10 last year when a bullet came within two feet of Doreen’s head after passing through a window frame at 4 a.m.

“Spotlighting is an all too common occurrence in rural Manitoba,” said the Sliworsky’s son-in-law, Wayne Lytwyn. “Not only does it pose a significant risk to public safety, the damage done by poachers and night hunters puts people’s lives at risk.”

The MWF says night hunting is a danger to people, pets, farm animals and private property. Along with the risk to people, numerous livestock have been killed or maimed by hunters using spotlights at night.

The MWF is calling on the province to ban spotlighting and has the backing of the Association of Manitoba Municipalities, Manitoba Beef Producers and Manitoba Natural Resource Officers’ Association. Anti-spotlighting resolutions have already been passed by 19 individual rural municipalities in Manitoba.

“One of the fundamental principles of safe hunting is knowing your target and what is behind it. But how can you possibly be sure of your target at night,” said MWF managing director Rob Olson.

Spotlighting remains legal for First Nations hunters, but not in areas “where it is dangerous to do so,” according to the Wildlife Act. Non-aboriginal hunters are not permitted to shoot at night.

The MWF has launched a campaign called NightWatch, which states its case for a ban on spotlighting activities.