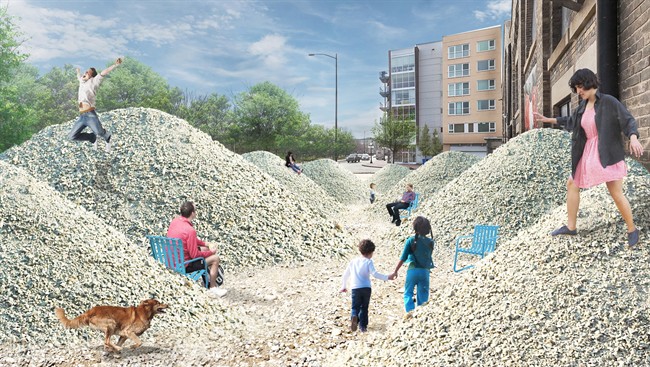 An artist’s rendition shows an installation of Winnipeg’s 2016 Cool Gardens featuring gravel dunes. Winnipeg’s summer-long Cool Gardens event, featuring innovative designs in downtown public spaces, tries to expand the idea of what a garden might be. (THE CANADIAN PRESS/HO)

WINNIPEG – Winnipeg’s summer-long Cool Gardens event, featuring innovative designs in downtown public spaces, tries to expand the idea of what a garden might be.

For 2016, a garden might be undulating dunes that resemble a gravel pit. Or red sandbags arranged into an X-shape. Or cow shapes in a pasture of clover.

Four winning projects, created by landscape architects and designers in Canada and Spain, were selected in the juried competition to produce installations for the fourth annual event, presented by the Forks and the non-profit group StorefrontMB. Entries came from more than 50 countries, StorefrontMB president David Penner said.

This year Cool Gardens is expanding to Brandon, Man., with a straw-bale tower installation that celebrates the city’s agricultural heritage. As well, several projects from past Cool Gardens are returning to Winnipeg.

“What we try to do is choose projects that are engaging,” Penner said. “So unlike a traditional garden that is meant to be viewed from the outside, these installations intentionally encourage you to participate with them somehow, whether by moving things around or sitting or climbing on them.”

Cool Gardens will run from mid-June until the end of September.