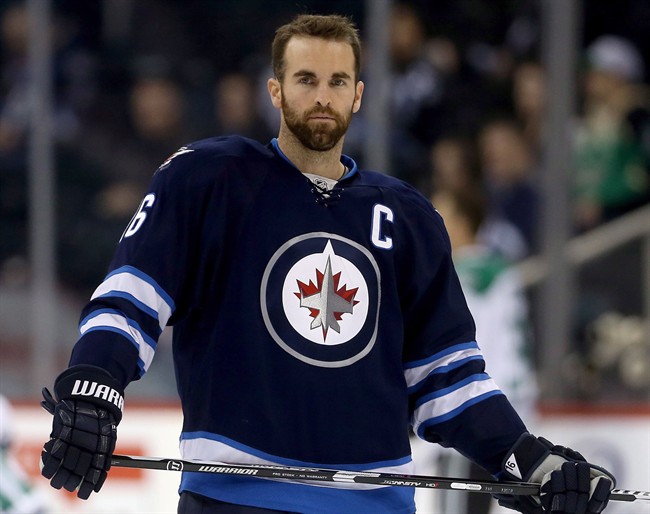 WINNIPEG – Winnipeg Jets captain Andrew Ladd was traded to the Chicago Blackhawks on Thursday in a multi-player deal.

Forward Matt Fraser and defenceman Jay Harrison are also being sent to Chicago. Both will report to the American Hockey League’s Rockford IceHogs.

Winnipeg gets forward Marko Dano, the Blackhawks’ first-round pick in the 2016 NHL Draft and a conditional pick in 2018.

Ladd, an unrestricted free agent after this season, was the Jets captain since they moved from Atlanta for the 2011-12 season.

He immediately upgrades the reigning Stanley Cup champion Blackhawks, filling a need on the left wing of their already-potent top-six forward group.

He seems likely to join Jonathan Toews on a Chicago top unit that will also likely include Marian Hossa, sidelined at the moment by injury.

The 30-year-old Ladd is also a former Blackhawk, playing there for two-plus seasons while winning a Cup with the club in 2010. Ladd also captured the Cup with the Carolina Hurricanes in 2006.

The Jets, meanwhile, land a nice haul for their future. A key piece of Chicago’s return in a summer trade with Columbus that made Brandon Saad a member of the Blue Jackets, Dano had 23 points in 34 AHL games with Rockford this season.

In addition to Dano and a first-round pick in the upcoming NHL draft, the Jets also pick up a conditional pick for the 2018 Draft.