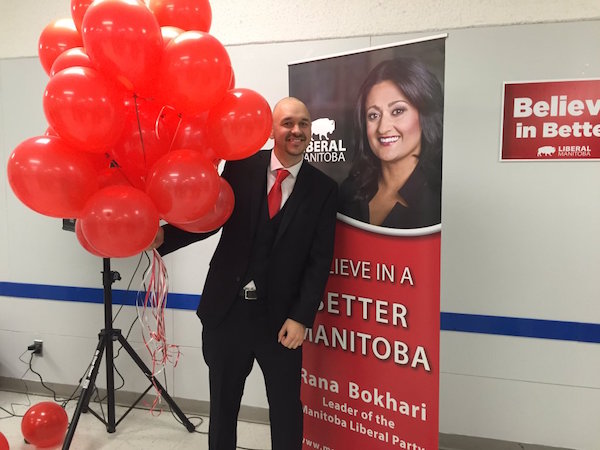 WINNIPEG – A Manitoba Liberal candidate who used derogatory terms to refer to women on social media was denounced by the party’s leader after resigning Thursday.

Jamie Hall was nominated as a Winnipeg-area candidate Tuesday night. Less than 24 hours later, the NDP demanded his resignation after unearthing dozens of tweets over the years in which Hall used terms such as “whore” and “skank.”

Hall initially apologized but also defended his comments by calling them humorous and satirical.

“The comments were disgusting,” she told reporters later in the day.

“That’s not who we are as a party. That’s not who I am as a person. As a woman, you can imagine I feel sick to my stomach right now even just standing here.”

The Liberal party issued a statement Thursday night saying it had severed its business relationship with Hall and “all social media services have now been transitioned.”

Hall wrote about the resignation on his blog Thursday. He said his tweets were taken out of context, so he would not be running.

“Because all the positive posts I’ve made don’t count, and my actions (working with women, having great relationships with women, etc.) are seen as less of a true window into my soul,” he wrote.

“People want their politicians to be perfect. People talk like me, but they’re not running for office, so I get the scrutiny.”

Hall’s tweets, dating back several years, repeatedly referred to women in derogatory terms. In one tweet, Hall asked whether a whore can truly be a whore if no one hears her scream. In his blog post, Hall said it was an excerpt from his self-published novel, although the book is not referenced.

“This does not reflect my personal views on women at all,” he wrote.

Another said: “You can put glasses on a whore but you can’t put a whore on glasses.”

Still another said: “I am prejudicial against women politicians” in reference to former vice-presidential candidate Sarah Palin and Republican politician Michele Bachmann.

“This whole tweet is strange,” Hall wrote on his blog. “I was running in a party with a female leader, and she’s amazing.”

Bokhari said Hall was vetted before being named a candidate but his tweets weren’t seen.

“At the end of the day, something happened and something was missed,” she said.

“We’re doing everything we can to go back and retrace those steps to see where the gap was and trying our best to move forward and make sure that this doesn’t happen again.”

Health Minister Sharon Blady, speaking on behalf of the NDP, said Bokhari’s silence for a day after the tweets came to light did not send a strong enough signal that sexism isn’t tolerated.

“You would hope from a leader that there would be clear, decisive action,” Blady said. “I would have preferred to see a leader intervene and ask for the resignation.”

Blady continued to defend NDP candidate Wab Kinew, who is running against Bokhari in a Winnipeg riding and who was criticized by Hall for using similar misogynist language during his career as a rapper. In one song, Kinew raps about hitting women in the face with both a fist and his genitalia.

Kinew has since apologized for his lyrics, both at a music awards ceremony and in his 2015 book “The Reason You Walk.”

“At the time I thought it was funny or had shock value,” Kinew wrote. “With the epidemic of violence against women, and indigenous women in particular, there is no excuse for this.”

The Liberals have one seat in the legislature going into the April 19 election. Polls show they are in a dead heat with the governing NDP at around 20 per cent support.