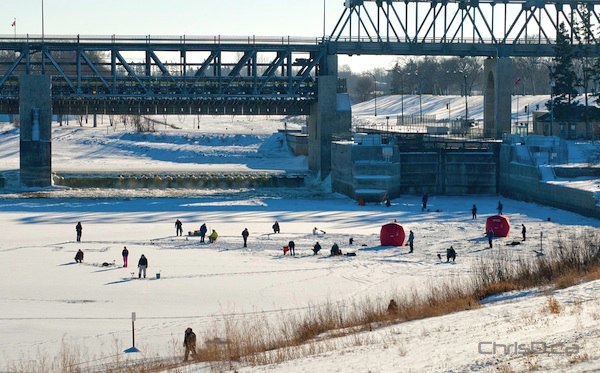 Fishers on the ice on the Red River in Lockport, Manitoba on Friday, December 30, 2011. (STAN MILOSEVIC / CHRISD.CA FILE)

The recent warm weather spell is prompting Manitoba Conservation and Water Stewardship to ask ice fishers to remove their shacks from lakes and rivers.

Ice conditions across much of southern Manitoba have been deteriorating lately, from Lake of the Prairies to Dauphin Lake and as far east as Lake of the Woods.

Ice in some spots did not reach its usual thickness in many areas this winter.

The province says March 31 is typically the last day for remove of ice shacks, but earlier removal is required this year.

Shacks on the Red River should be removed by March 13. Shacks in the area south of Riding Mountain National Park, as well as those on Lake of the Prairies, Dauphin Lake, Moose Lake and Buffalo Bay in the Lake of the Woods off the ice by March 15.

← Previous: Portion of McGillivray to Close for Hydro Work Next: Winnipeg Humane Society Goes to the Dark Side →
Tags: Manitoba | Red River | Weather