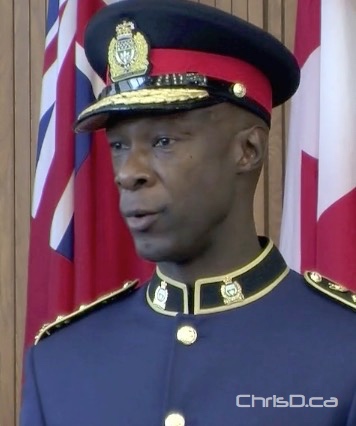 Clunis, who is 52, began with the Winnipeg Police Service in 1987 and has served in all major areas of the organization.

“My policing career has always been about purpose, and over the past year it has become increasingly clear to me that my purpose has been fulfilled with the support of all our members, past and present,” he said Thursday in a statement released by the Winnipeg Police Service.

“It is time for me to pursue new goals with the continuing purpose of impacting people in very positive ways.”

Clunis said he had been thinking about his retirement for up to a year. He swayed away from reports that his departure had anything to do with the possibility of 80 police officers being cut from the service due to budget cuts.

“I am absolutely confident that I accomplished everything I set out to do,” Clunis said of his three and a half years as police chief and his 29 years of service.

Clunis said he originally joined the WPS to set an example for young people.

The veteran of the service was sworn into his current role as police chief in 2012.

Police board chairman Scott Gillingham said a search committee will immediately begin the task of finding a new police chief. Clunis added he trusts the board’s role in finding his successor, but added he would gladly lend his assistance if asked.

I became a police officer out of a great desire to make a difference in our community. My career has given me enormous opportunities to fulfill that desire and it is that same desire for making a difference that caused me to apply for the position of Chief of Police.

When I was sworn in as Chief of Police on November 2nd, 2012 I declared that we will make a difference in preventing crime and disorder in our city by working together. By raising the consciousness of our community, in understanding that much of our crime is socially constructed and that only by addressing the social roots of crime, will we see a cost effective, sustainable answer to crime.

There are a lot of good things happening in our organization with a lot of attention focused on moving forward as we occupy our new headquarters. Things are progressing well and the future for the organization is on solid ground.

Over the past year I’ve been contemplating my future as Chief. I took on the job with specific goals in mind, wanting to transform the nature of policing in our city and to enhance the work environment for our members.

My policing career has always been about purpose and over the past year it has become increasingly clear to me that my purpose has been fulfilled with the support of all our members, past and present. It is time for me to pursue new goals, with the continuing purpose of impacting people in very positive ways.

I will be retiring from the Service in the near future. I am prepared to continue serving until a new Chief has been selected, which I hope will be within the next several months.

Thank you for working with me in creating a culture of safety for all.

Watch video of Clunis being sworn in as police chief on November 2, 2012: