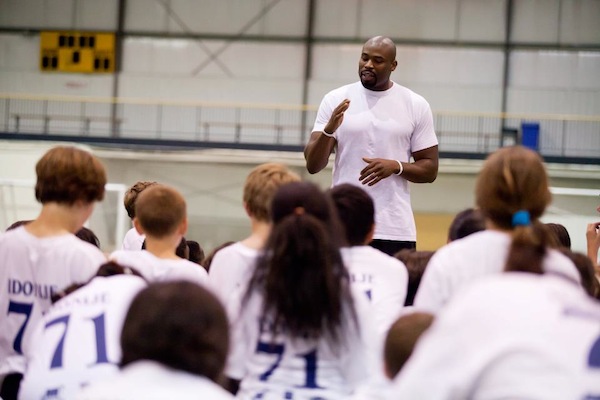 Israel Idonije coaches a group of children during an all-star football camp in 2012. (TRISTAN FAST / FILE)

WINNIPEG — Israel Idonije‘s #70 jersey number has been the first to be retired of a former Manitoba Bisons football player.

The former NFL defensive end was honoured Saturday night at the alumni Jerseys and Jeans Scholarship Dinner at the University of Manitoba.

Idonije, 35, played for the Bisons from 2000-2002 before launching his professional 11-year career in the NFL, including an appearance in a Super Bowl.

The Lagos, Nigeria native originally immigrated to Brandon, Manitoba with his family when he was four-years-old.

“As a player, Israel was an often unstoppable and always relentless defensive lineman. But more importantly, he was a great teammate,” said Bison football head coach Brian Dobie.

“In retiring the only jersey ever in our Bison Football program’s history, we recognize that Israel represents the class, integrity and pure competitiveness that all of us strive for.”

The Bisons will make a formal on-field presentation to Idonije during a future football game to be announced at a later date.