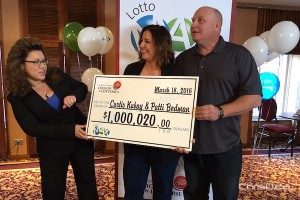 Taco night may become a new tradition in one Winnipeg couple’s household.

Bodman said she asked Curtis to go out and buy some sour cream last Friday for tacos, but he was reluctant. After some pushing, he made his way to the 7-Eleven at 1863 Henderson Highway to make the purchase. While there, he also picked up a Lotto Max ticket before the cutoff time.

The animated couple found out they had won on Monday morning.

“I got home pretty late and checked the ticket online,” Kubay said. “Patti had already gone to bed and I was contemplating if I should wake her up to tell her or not.”

“I decided I had to tell her. How can you keep something like this a secret?”

The couple says they plan to take some time to figure out what to do with their windfall, but they would like to take their family on a tropical vacation.

“Curt’s mom has never been to the ocean, so we’d like to take her to Mexico, maybe Hawaii,” said Bodman, who also goes by the name Alix Michaels on 94.3 The Drive.

They also plan to both continue working.