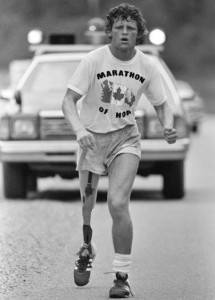 WINNIPEG — An exhibit to celebrate the life and legacy of Canadian Terry Fox is coming to the Manitoba Museum.

“Terry Fox — Running to the Heart of Canada” opens on July 14 and provides an in-depth look at Fox’s 143-day, 5,373-kilometre journey from St. John’s, Newfoundland to Thunder Bay, Ontario.

“Terry Fox has moved countless Canadians and his heroism continues to inspire us today,” said Claudette Leclerc, executive director of the Manitoba Museum.

“As Manitobans celebrate Terry Fox Day and Canadians prepare to participate in the Terry Fox Run, we can offer them a unique opportunity to better understand the context of the original Marathon of Hope and the spirit of the man who ran it.”

The museum is hoping Manitobans can contribute to the exhibit by loaning any artifacts and memorabilia that may be hidden in basements and attics.

“If you have anything related to the early days of Terry’s childhood, or if you have something from a Terry Fox Run that you think is special, please contact us,” said Dr. Roland Sawatzky, curator of history at the Manitoba Museum.

Terry, who was born in Winnipeg, died at the age of 22 in June 1981. He collected some $24 million — achieving his goal of raising $1 from every Canadian. Since then, close to $700 million has been raised in his name for cancer research.