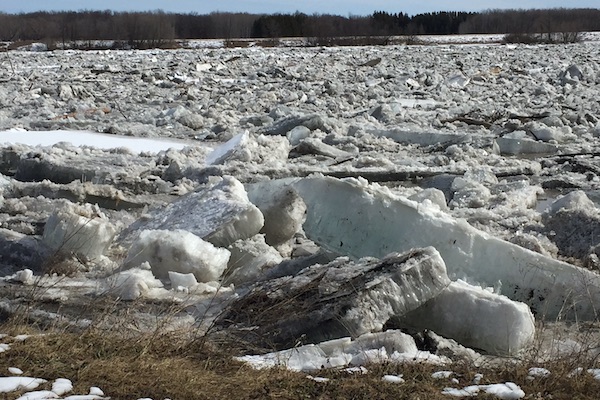 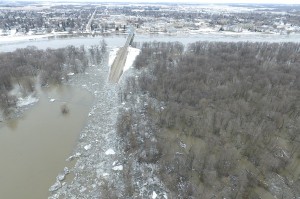 An aerial view of flooding in the Selkirk area on Sunday, March 20, 2016. (VIKTOR KOOS / FOR THE SELKIRK RECORD)

Officials with the province are monitoring an ice jam currently north of Selkirk on the Red River.

Ice began to build up over the weekend in the area of Peltz Drive and McIvor Lane, causing water levels on the Red River to rise. As a result, the Selkirk Bridge was closed to vehicle traffic, along with a stretch of Highway 204 in east Selkirk.

“The ice jam is caused by the narrow river channel in the area. Officials are monitoring the situation and will consider use of the Amphibex ice breakers if conditions, including open water downstream, permit their usage,” the province said in a release.

Ice jam mitigation efforts began this winter, where a 24-kilometre channel was broken on the Red River using ice-cutters and other equipment.

River levels should remain where they currently are over the next seven to 10 days, with no significant precipitation in the forecast.

The Red River Floodway inlet control structure is not expected to be operated this year, despite a small amount of water flowing into its channel.

The Red River in Winnipeg crested late March 18 at approximately 18.1 ft. at James Avenue due to ice jams. The peak flow was approximately 43,000 cfs.