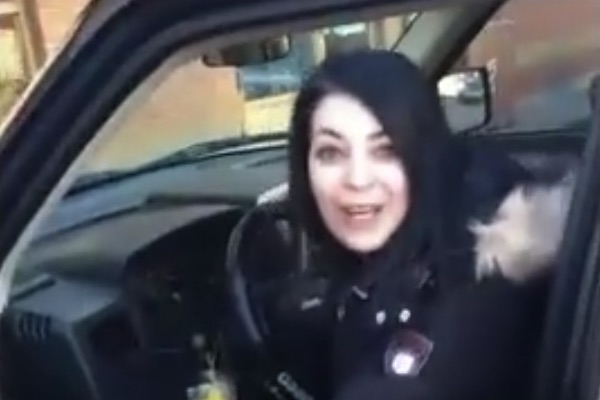 A screengrab from a YouTube video showing a woman throwing coffee at a man in Toronto as her repeatedly asks why she parked in an accessible parking spot. (YOUTUBE)

TORONTO – A woman who pitched two cups of coffee at a man when he confronted her for parking in a handicapped parking spot outside a Tim Hortons has received a police warning after a video of the incident garnered international attention.

“We’ve cautioned her for assault and parking in a disabled spot, which is really what we can do under the circumstances,” Pugash said.

Pugash declined to name the woman.

Favro, in the interim, was trying to put the genie back in the Internet bottle.

In a Facebook posting, he explains why he removed his YouTube video — shot Monday — which has been viewed more than a million times and shared by tens of thousands.

“I don’t want to grind this woman into the ground,” Favro says. “There has to be a way for her to recover.”

The video, still widely available and posted by outlets across Canada and as far away as the U.K. and New Zealand, sparked howls of social media outrage, with many condemning her as a “brat,” among other things.

Favro, however, said some of the comments directed at the woman, who appears to be in her 20s, went too far.

“Her behaviour and attitude may be unsavoury but that does not warrant the many comments being posted inciting real violence against her,” Favro said.

Favro’s video begins with his politely asking the woman why she had parked in the reserved spot as she returns to her Jeep with her Timmies coffee and iced coffee.

“Are you handicapped?” he is heard asking.

“Well, what makes you so special that you can park in a handicapped spot?” he asks.

“Record me, I’ll break your (expletive) phone,” she says as she gets into the driver’s seat, and slams the door.

The woman then gets back out, and hurls what appears to be the iced coffee — along with profanities — at the videographer.

When he then persists in asking, “What makes you so special?” she throws the coffee at him.

“I’m taking this to the police, you assaulted me,” he says.

“Good for you!” she yells, before backing up and driving away, licence plate clearly visible in the video.

Regardless, Favro’s efforts to pull back the video demonstrated the difficulties of tamping down on a video gone viral.

“Unfortunately, once it’s on the Internet, it’s hard to take it down,” said his Facebook friend, Natasha Marie. “Yes, you can delete your video on YouTube, but this video has been posted on other news outlets.”

Laura Dixon, in a Facebook comment, said Favro was wrong to try to undo what he had done.

“If the guy was feeling remorse for publishing it, perhaps he should not have posted it online and just gone to the police,” Dixon wrote.

“I agree her language is appalling, she is lazy and inconsiderate, however, this will remain with her for the rest of her life… my father is handicapped and relies on those spaces as do millions of others.”