Home » News » Selinger’s NDP Would Invest $10B in Infrastructure

Selinger’s NDP Would Invest $10B in Infrastructure 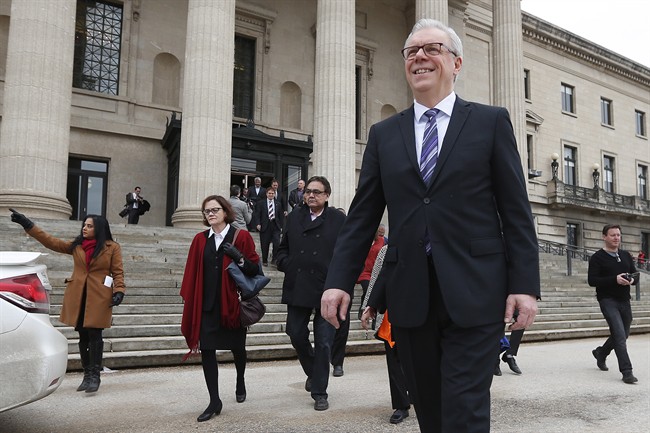 Manitoba Premier and NDP Leader Greg Selinger leads his cabinet and candidates to the Lieutenant Governor of Manitoba’s office to call the 2016 provincial election in Winnipeg, Wednesday, March 16, 2016. (THE CANADIAN PRESS/John Woods)

Manitoba’s NDP government would invest $10 billion over the next six years on infrastructure if re-elected.

The party would also work to twin the Trans-Canada Highway east to Ontario to raise the speed limit to 110 km/h by 2022.

The major infrastructure investment is said to create more than 100,000 jobs and boost the economy by $11.5 billion, Selinger said.

Winnipeg’s share of the funding would be approximately one-third, dedicated to the Chief Peguis Trail extension and the Louise Bridge, and $250 million to renew Winnipeg roads.

“The difference between the NDP and the Conservatives is simple: we build, they cut,” Selinger said. “While the Conservatives want to cancel community agreements with East Side Road and they blocked Freedom Road, we’re committed to support these and many more projects to change the face of Manitoba.”