Main Street in Carman, Manitoba is leading the province for the title of “worst road” since CAA launched its annual campaign on March 9.

CAA Manitoba says it has received nearly 4,000 votes for 450 roads and another two weeks still remain.

“With thousands of votes so far, it’s clear Worst Roads demonstrates there is major public interest in the state of our streets, and serious demand that our next elected officials do something to improve our infrastructure and road safety,” said Erika Miller, public and media relations specialist with CAA Manitoba.

“Manitobans have a lot to consider, especially when it comes to infrastructure, before they step into the voting booth on April 19.”

Following Carman is Road 353 in Brookdale, and Manitoba 280, which won the 2015 title of worst road.

Voting will remain open until April 6 on the CAA website. 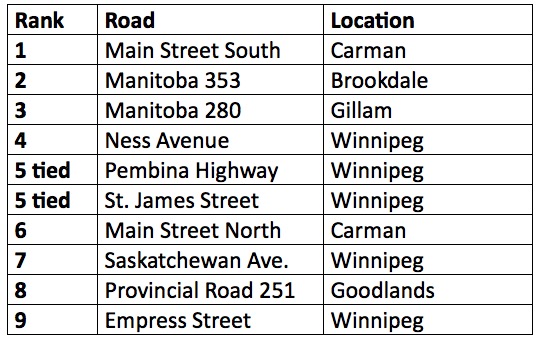