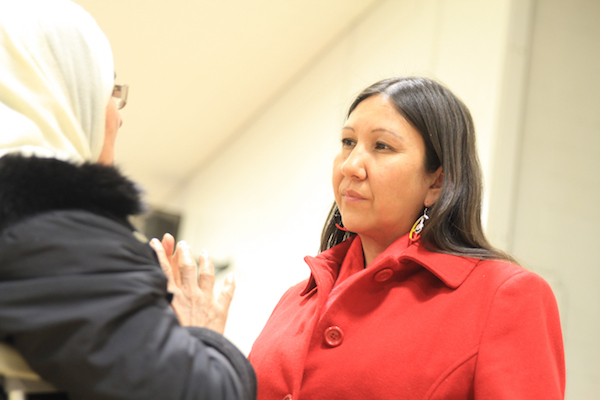 Althea Guiboche said during a poverty debate this week she wants to create a homeless village at the site of a flour mill in Point Douglas, an area where homeless people frequent.

Guiboche said the village would have individual rooms, a community kitchen, and laundry.

“It’s a vision I’ve had now for a while,” Guiboche said in an interview after the Make Poverty History Manitoba debate at Gordon Bell High School on Wednesday.

“I call it the homeless transitional village, so we take them off the street, put them in their own unit, give them the resources they need to transition into a normal lifestyle.”

Guiboche said the village would house up to 100 homeless people, but she would eventually like to see as many three villages created in Winnipeg.

“We would have to make at least a few villages.”

Guiboche said a homeless village is a better idea than social housing because the transition from the street to a house is often hard for homeless individuals.

“Even just sleeping in a home they find hard transitioning from being outside to actually sleeping inside of a house.”

A similar village to the one Guiboche envisions already exists in Oregon.

Guiboche said she has yet to talk about the villages with Liberal leader Rana Bokhari.

The Liberals have just one seat in the Manitoba legislature, but opinion polls suggest the party’s popularity has recently grown.

Voters go to the polls on April 19.