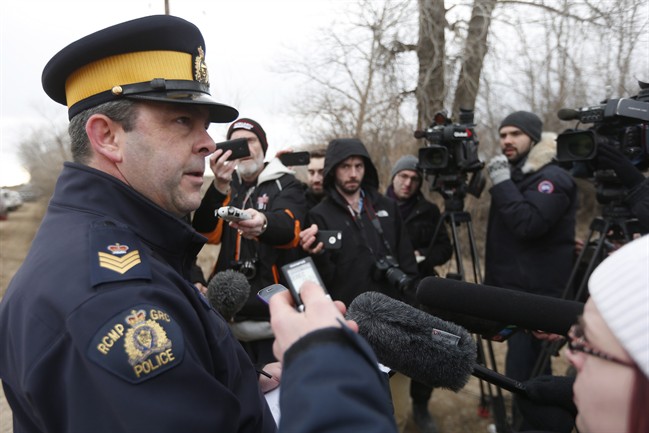 RCMP Sgt. Bert Paquet speaks to media on the discovery of two-year-old Chase Martens’ body in a creek close to his home just north of Austin, Manitoba on Saturday, March 26, 2016. Martens went missing from his family home Tuesday evening. (THE CANADIAN PRESS/John Woods)

The search for a missing two-year-old boy in western Manitoba has come to a tragic end.

RCMP say the body of Chase Martens was recovered from a creek on Saturday near Austin. The body of water was within a “high probability area” about a half-kilometre south from the family’s home where searchers had combed previously. Due to changing water levels and conditions, the area was typically revisited.

A group of search and rescue volunteers from Winnipeg made the discovery shortly after 1 p.m.

Martens went missing Tuesday evening after he was last seen playing in the yard of his rural home.

“This appears to be exactly what we all thought it was — a tragedy,” said RCMP Sgt. Bert Paquet. 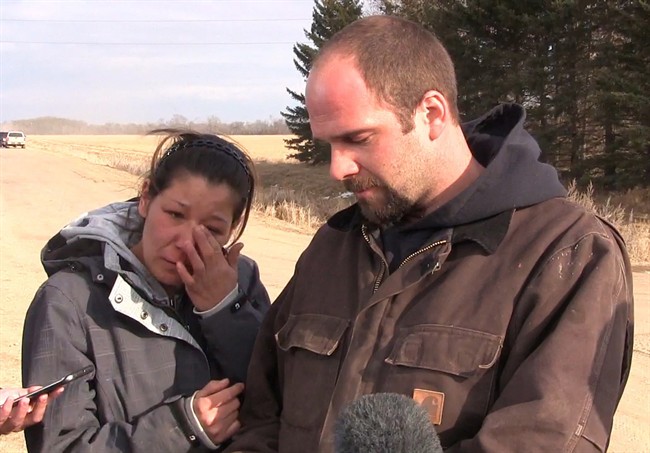 Thomas Martens and Destiny Turner shown in this still image taken from video, make a brief appearance outside their home near Austin, Manitoba on Thursday March 24, 2016. (THE CANADIAN PRESS)

An extensive ground and air search began and hundreds of volunteers came out to assist in the efforts in the days to follow. The parents of the boy made a public tearful plea on Thursday for anyone with information to come forward.

The search expanded on Friday to include a four-kilometre radius of the property from where Martens was last seen. About 30,000 volunteer hours were spent over the four-day period.

“This is the worst possible outcome that could happen. We’re all devastated here. We feel for the parents,” said James Favel, an organizer with the Bear Clan, a volunteer safety-patrol group from Winnipeg whose members helped with the search.

“I have a grandson myself that’s two-and-a-half years old. I would be completely out of my mind right now,” Favel added.

No obvious signs of foul play is suspected in the death and an autopsy on Chase’s body will be carried out on Sunday.

The search has ended for Chase MARTENS. #rcmpmb can confirm that his body was found earlier today.

#rcmpmb thanks its partners and the thousands of volunteers that assisted in the search.