Home » Columns » Riding Out of History

Riding Out of History 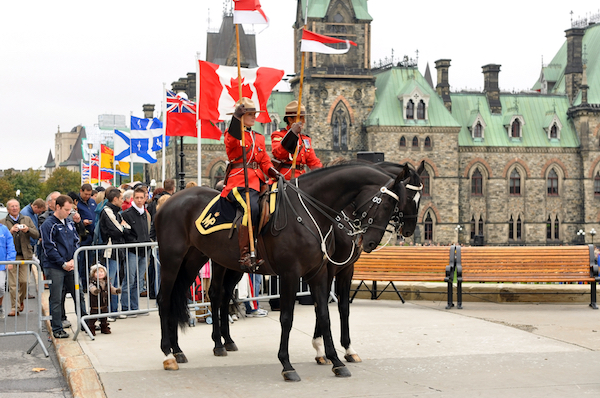 NEEPAWA, Man. — It’s one of the most iconic Canadian images; wearing a tan hat and red jacket, a Mountie sits atop a black horse. This image, known around the world, is one of our greatest cultural icons.

The Royal Canadian Mounted Police (RCMP) of today bears little resemblance to the force that Sir John A. MacDonald named the North West Mounted Police (NWMP) when it was created 1873. However, each summer, as the RCMP Musical Ride tours the country, Canadians have a chance to get a taste our national police force’s cavalry history.

In 1869, the Canadian government purchased what became the North-West Territories. The government wanted to settle this vast territory, but they needed some way to establish and maintain order. The solution was the creation of the NWMP, the precursor to the RCMP.

The NWMP began with a strong cavalry history, not only were many of the officers from the British Army or Canadian Militia, it was the only way to police the western frontier in the 1800s– there were no railways and certainly no cars.

Many parts of today’s Musical Ride can be traced to those early days. The lance carried by the riders in the Musical Ride traces its heritage back to the March West, when the 302 policemen, 338 riding horses, 114 Red River Carts, 73 wagons, 142 oxen, 21 drivers, two field guns and 93 head of cattle headed out to construct and man the first NWNP forts from which patrols would be conducted. Twenty of those men carried lances adorned with pennants. Today, these lances are used only by the Musical Ride.

The scarlet tunic too was part of that first uniform. They were originally from Canadian Militia stores.

Stationed across the West, the NWMP performed cavalry drills to display not only their riding skills, but also for entertainment. While the first official musical ride was performed in 1887, at the Regina Barracks, there are said to have been performances of mounted horsemanship as early as 1876. The first public performance of a musical ride took place in 1901 at the Regina fair.

As the 20th century got underway, the horse became less important to both the Canadian population and its police force. While riding would continue to be part of basic training, the force’s last mounted patrol took place in the mid 1930s.

The first overseas Musical Ride demonstration took place in 1919 in Siberia. The ride continues to take part in some international performances.

In 1966, recruits no longer learned to ride as part of their training. While cavalry training was no longer part of RCMP officers’ training, the government decided that the Musical Ride would continue, as a way to promote the RCMP and highlight Canada.

Today, the RCMP Musical Ride is based out of the RCMP’s Rockcliffe, Ontario facility. While performances of the ride are composed of 32 riders and horses, a number which has stayed relatively constant since the ride’s early days, 36 horses, 35 riders travel with the Musical Ride.

While originally staffed by trainees, now, the officers who join the musical must have completed at least two years of active police work before requesting to join the ride. The majority have no previous experience with horses. The riders come from across the country and stay with the Ride for only three years, meaning that that one third of the riders change each year.

Since 1939, the year after they began using only black horses, the RCMP has operated a breeding program aimed at producing horses of a uniform colour (black) and size (between 16 and 17.2 hands), as well as having the quiet demeanour needed for their job.

The Red Serge, the black horse, the flat brimmed tan Stetson, the intricate maneuvers and the thundering hooves of the charge. For those wanting to experience this truly Canadian experience, the Musical Ride will be touring Manitoba this year, with performances in Neepawa, Dauphin, Austin and Brandon.

It’s maybe a little bit ironic that a country so associated with peace also be so strongly tied to its police force. But then again, while the U.S. has the Wild West, we have the Mountie.