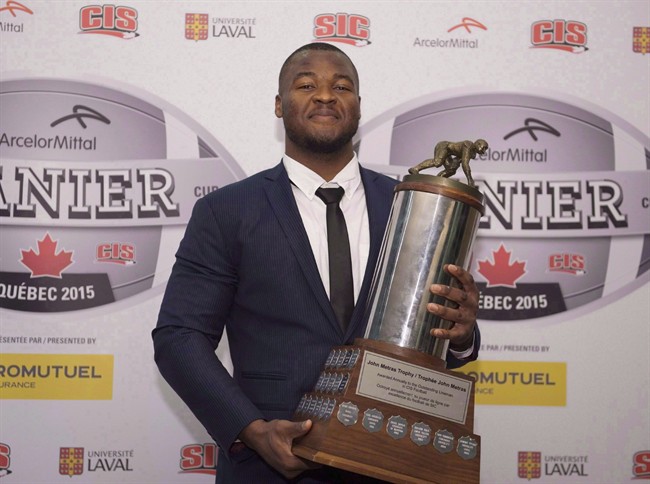 Israel Idonije and David Onyemata share the same homeland, and both found football after arriving in Manitoba.

Despite their similar starts, Idonije says Onyemata will forge a different path to the NFL.

Idonije, 35, began his 11-year career in 2003 as an undrafted free agent with the Cleveland Browns. He believes Onyemata, 23, will be taken in next month’s NFL draft.

“On my pro day, I had one team working me out while he had 17,” Idonije said in a telephone interview. “When you look at his talent, there’s no reason why he shouldn’t be on somebody’s draft board.

“He’ll become the first Manitoban drafted into the NFL. What a great chapter in his story that will be.”

Onyemata was a ’15 first-team All-Canadian and won the Metras Trophy as Canadian university football’s top lineman. He played in the East-West Shrine game and at second overall is the top-ranked CIS prospect for the CFL draft May 10.

Two weeks ago, Onyemata — who’s represented by Carter Chow, one of star quarterback Tom Brady’s agents — enhanced his draft stock south of the border at his pro day. With 17 NFL scouts present, he posted 33 reps in the bench press, had a 33-inch vertical jump and nine-foot, 11-inch broad jump while posting a 40-yard dash time of 5.06 seconds.

Idonije, also a Lagos native, immigrated to Brandon, Man., with his family at age four. He began playing football in high school before heading to Manitoba, where he captured the ’02 Metras Trophy as a defensive lineman and participated in the East-West Shrine game before becoming the first Bison to crack an NFL roster in ’04 with the Chicago Bears.

Idonije spent nine seasons with the Bears, playing in their ’07 Super Bowl loss to Indianapolis. He finished his career in 2014 with the New York Giants and earlier this month Manitoba retired Idonije’s No. 70, the school’s first football player to receive the honour.

The six-foot-six, 275-pound Idonije is also popular on social media with over 94,000 Twitter followers (@iidonije).

Onyemata’s two biggest challenges are his football inexperience and having played collegiately in Canada. Ironically, Idonije heard the same in ’03.

“Personally, I don’t put much into it because I was that guy,” Idonije said. “Yeah, I never played football but I can run faster than most people, I’m stronger than most people so the things I don’t know, teach me. Generally, if you’re a good teacher then you should be able to help me get there.

“The biggest things holding back the Canadian athlete, as far as collegiate football, are their mindset and mentality. There are guys I played with at the University of Manitoba who could’ve played in the NFL if they had a different mindset.”

Idonije lists Onyemata’s mindset and coachability as his best assets. The latter is especially important during training camp as many veterans are willing to divulge tricks of the trade to open-minded rookies.

“I remember in Cleveland having legendary guys like Courtney Brown (2000 first overall pick), Orpheus Roye and Kennard Lang who were like, ‘Hey rook, see this? When you see this, do this,'” Idonije said. “That accelerates your learning curve and overnight you can learn quickly and understand the concepts you know little about.

“There’s a lot of talented kids out there but you must be coachable and willing to take coaching and apply it. I’ll take a kid who’s not as talented but knows his playbook front to back, gets into the game and executes what he knows and is 110 per cent effort on the field. David has those qualities . . . and all the intangibles you look for.”

Idonije insists being drafted isn’t a guarantee for a long, productive NFL career.

“Getting drafted or signed as a free agent is just an opportunity,” Idonije said. “First of all, you can’t make the club from the tub so David will have to manage his body and do whatever he needs to do to stay healthy throughout training camp.

“He must understand somebody has the position he’s coming in to take. If he outperforms the guy he’ll have a roster spot, if he doesn’t he’ll be out on the street. That’s what it comes down to and any time you’re not on the field you’re missing an opportunity to showcase your ability.”

Having an 11-year veteran’s brain to pick is huge for Onyemata. But Idonije doesn’t believe he would’ve fared differently if he’d had a mentor coming out of school.

“I think some people are built to trail-blaze, some are built to blaze the cut trail,” Idonije said. “I’ve always considered myself a trailblazer, I’m built to go where no man has gone before and believe me, it wasn’t easy but I took it as a serious challenge when people said, “Don’t worry, Israel Idonije will be back in the CFL.’

“I swore, ‘Listen, I won’t be back in the CFL,’ and did everything moving forward for that. It’s exciting having been through it and now being able to experience it vicariously a second time through a young man like David is going to be fun.”