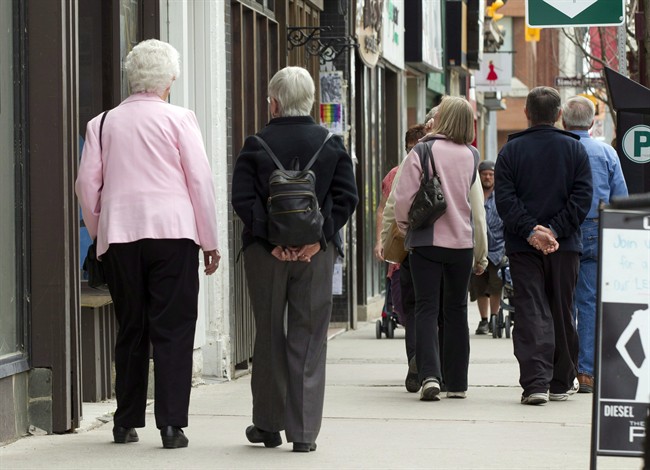 Senior citizens make their way down a street in Peterborough, Ont. on Monday May 7, 2012. (THE CANADIAN PRESS/Frank Gunn)

WINNIPEG — Seniors want better transportation options as a result of electing the next provincial government on April 19.

That was the main takeaway from Seniors Vote 2016 on Wednesday at the Gwen Secter Creative Living Centre.

30,000 older Manitoba adults are represented by a coalition of six organizations through Seniors Vote 2016. Seniors identified lack of transportation as the main creation of social isolation.

“There needs to be a focus on the needs of seniors and others who do not drive. There are few transportation options in rural and urban areas, apart from the support of friends and family and volunteer driving programs where they exist.”

The coalition says it applauds previous election pledges to lower ambulance fees, but there needs to be additional steps. Many seniors do not qualify for Handi-Transit and those on fixed incomes cannot afford to always rely on taxicabs.

The coalition has six main issues they hope to raise awareness of during the campaign, including retirement & incoming security, affordable housing, healthcare, transportation, social engagement & participation, and health aging & quality of life.