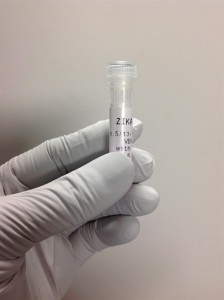 Insect scientists at Brock University have received a shipment of Zika virus that will allow them to see whether mosquitoes native to Canada can become infected with the pathogen and potentially transmit it to humans. (THE CANADIAN PRESS/ho-Brock University)

WINNIPEG — Two Manitobans have been identified as carrying the first cases of Zika virus in the province.

Manitoba Health says both individuals recently travelled to an area affected by the current outbreak.

The overall risk to Manitobans remains very low as the species of mosquitoes that can carry the virus are unable to survive the cool weather in Manitoba or Canada.

“Travellers to areas affected by the current outbreak and those areas at risk of an outbreak can protect themselves against Zika virus by taking individual protective measures to prevent mosquito bites including using insect repellent, wearing protective clothing, using mosquito nets, and ensuring that doors and windows are screened,” the province said.