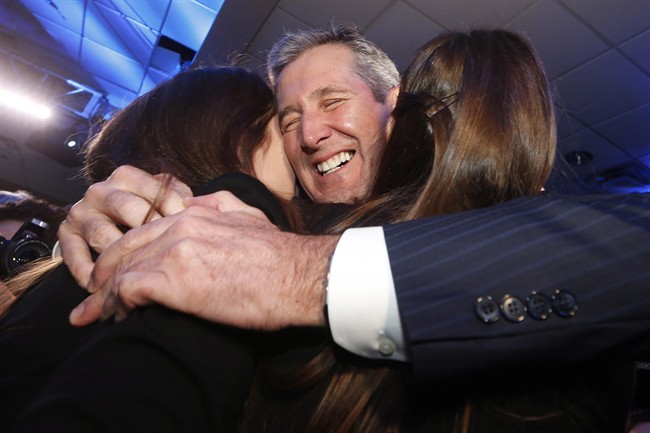 Brian Pallister has become the province’s 22nd Premier as he and his PC party took the election by storm, forming a majority government and taking down Greg Selinger and the NDP after almost 17 years in power.

Following Selinger’s speech, in which he announced his resignation as NDP leader, 61-year-old Pallister and his wife Esther entered the filled-to-the-brim ballroom at Canad Inns Polo Park to the tune of “Safe and Sound” by Capital Cities as his supporters and candidates loudly cheered and clapped.

“Tomorrow, Manitobans are going to wake up to a beautiful spring morning and see that the sky is blue,” said Pallister as he addressed the crowd of enthusiastic volunteers and candidates.

PC strategist Michael Richards said he believes it was a combination of a “positive and forward looking campaign that ran on facts and a desire by the electorate to replace a tired government that was out of touch.”

“Voters saw that we really had a plan in place to take years of NDP mismanagement and bring positive change to Manitoba,” Richards said. “The deceit about raising the PST, the internal fighting within their party which took attention away from the issues facing the province, their entire record spoke for itself and clearly resonated with Manitobans.”

“We will savour tonight and then get ready to go to work immediately,” Richards said, noting there will have to be a period of time for transition to take place.

Heather Stefanson, who maintained her PC seat in Tuxedo, said the outcome of this election was a sign people wanted change by seeking hope for a better future.

“It’s unfortunate that the NDP decided to take the fear mongering and scare tactic approach which is something Manitobans do not appreciate,” said Stefanson. “Clearly, they saw and heard the desperation and didn’t want any part of that and looked for a brand new start.”

Some of the high profile seats in this election being closely watched, particularly in Winnipeg, that went from orange to blue were in Riel (Rochelle Squires) , Seine River (Janice-Morley-Lecomte) and Southdale (Andrew Smith). Then there was the seat in Brandon-East that has been NDP for its entire 47-year history that NDP’s Drew Caldwell lost to the Conservatives.

Advance Care Paramedic Ashton Poudrette said he and his colleagues couldn’t help but be impressed by the attention given to them over the past several months by Pallister and members of his caucus.

“We were never given an opportunity to sit down with anyone from the NDP to talk about the issues we felt were important such as ER wait times,” said Poudrette. “That’s why we threw our support behind Brian and his party because they were genuinely supportive of our goals.”

Pallister vowed that under his watch, there will be “more money on the kitchen table than there is on the cabinet table.”

“And as of tomorrow, everyone in this province will be treated as a supporter,” Pallister said.