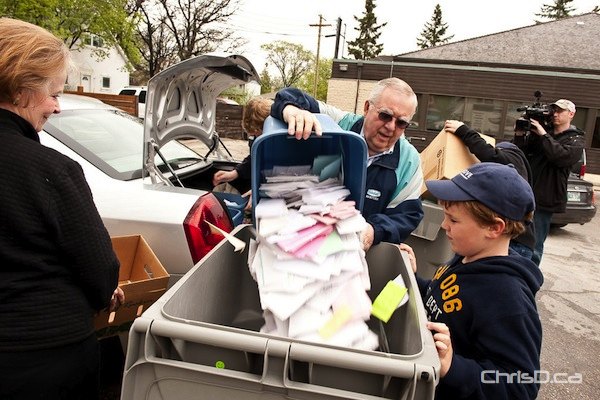 Walter Schurko empties his personal documents to be shredded during an event on Henderson Highway. (TED GRANT / CHRISD.CA FILE)

Four Crosstown Civic Credit Union locations will be accepting documents on Saturday to be safely shredded.

The 9th annual CCCU Shred Day will have Iron Mountain on hand with mobile units where residents can drop off old bills, tax returns, financial statements and other sensitive documents.

“The response in the past has been impressive. Last year, for instance, the event raised $14,860 for Cancer Care Manitoba. We hope to exceed that figure this year,” said CCCU CEO Mona Forsen.

Accepted donations will support the Heart and Stroke Foundation of Manitoba. CCCU will match all proceeds collected up to a maximum of $10,000. Donations of $15 and more will receive a tax receipt.