Steve Ashton Not Ruling Out Another Run for Manitoba NDP Leadership 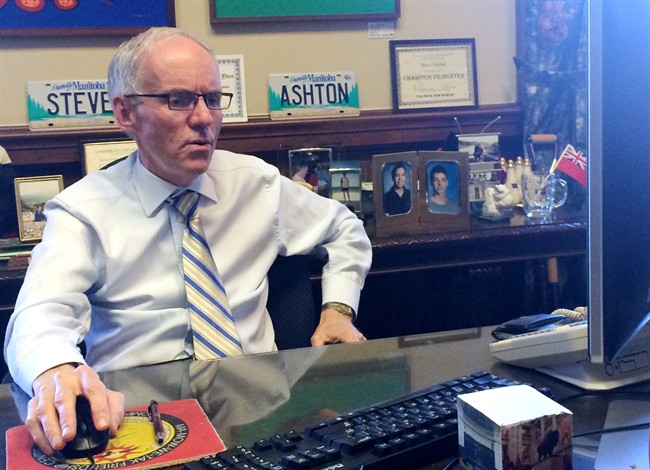 Steve Ashton speaks to The Canadian Press in Winnipeg on Friday, April 29, 2016. Longtime Manitoba cabinet minister Steve Ashton is not ruling out another run for the party leadership, despite losing his seat in the April 19 provincial election. Ashton was a legislature member for 35 years, and says he is not done with politics. (THE CANADIAN PRESS/Steve Lambert)

WINNIPEG – Despite losing his seat after 35 years in the Manitoba legislature, Steve Ashton says he is not done with politics and he isn’t ruling out a third run for the provincial NDP leadership.

“If someone tries to sell you a Steve Ashton retirement ticket, don’t buy it. I’m not done,” Ashton, 60, said Friday as he was preparing to vacate his ministerial office.

Ashton said he is still absorbing the “freight train” that hit the NDP on election night April 19. The party was ousted from government after 17 years and reduced from 35 seats at the time of the election call to 14. Ashton lost his Thompson seat, which he had held since 1981, to Progressive Conservative Kelly Bindle.

He said he is not actively thinking about entering a leadership race expected next spring to replace outgoing premier Greg Selinger, but he left the door open.

“I’m not going to do the never say never.”

Ashton was the longest-serving member of the legislature. He served in a variety of cabinet portfolios, including infrastructure and transportation, water stewardship and intergovernmental affairs.

He was never handed one of the big jobs — health, justice or finance — and was often viewed as a bit of a party outsider.

When he first ran for the NDP leadership in 2009, no other cabinet minister backed him. He lost that race to Selinger.

When Selinger faced an internal revolt last year, Ashton ran again and finished third in a three-way race that the premier survived. Selinger announced his plan to resign as leader on election night.

Ashton said he has firm ideas on how the party can rebuild and is adamant about a desire to change a “seriously flawed” leadership selection.

He wants the party to drop an approach in which unions and constituency associations choose delegates who then vote at a convention. Union leaders for the most part backed Selinger last year. Ashton would like to see every party member have a vote, with some ballots set aside for union officials.

He also wants the party to adopt a leadership review used by the federal NDP and other parties. It allows party members to vote on whether to open up the leader’s job to other contestants.

The only way Manitoba NDP leaders currently undergo a job assessment by party members is if an opponent openly runs against them at a convention.

Ashton is not the only member of his family who has taken a run at party leadership. His daughter, Niki Ashton, is an MP who ran for the federal NDP leadership in 2012 and is being touted by some as a potential candidate to succeed Tom Mulcair.

Ashton said he is not making any immediate decisions, but plans to stay involved with the NDP in some capacity. He points to politicians who remained politically active into their 60s, such as former prime minister John Diefenbaker and former NDP leader Tommy Douglas.

“Tommy Douglas, he was defeated twice, and ran again.”