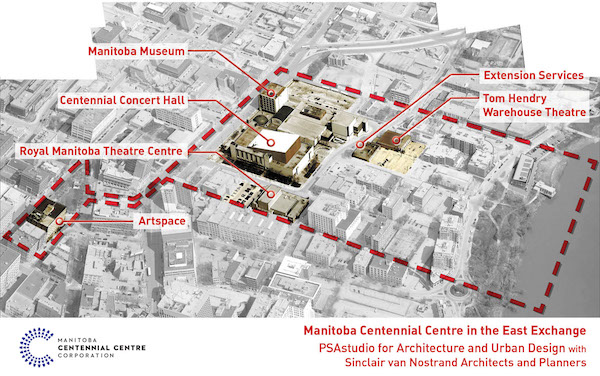 A study looking at the future of Winnipeg’s theatre and arts district will set the groundwork for future redevelopment.

The Manitoba Centennial Centre has hired PSAstudio for Architecture + Urban Design with Sinclair van Nostrand Architects + Planners to lead a study over the next year.

“The Manitoba Centennial Centre Corporation was established to develop an arts centre to benefit all Manitobans,” said Robert Olson, MCCC CEO. “Fifty years later, we are embarking on a period of revitalization based on the future needs of our artistic and cultural communities and the greater public.”

The MCC includes the Centennial Concert Hall and the Planetarium, the Manitoba Museum, Royal Manitoba Theatre Centre, Artspace and Manitoba Production Centre on the west side of Main Street, as well as the Warehouse Theatre and Extension Services building in the East Exchange.

The study will begin with consultations in May to determine the future needs and costs to each of the facilities.