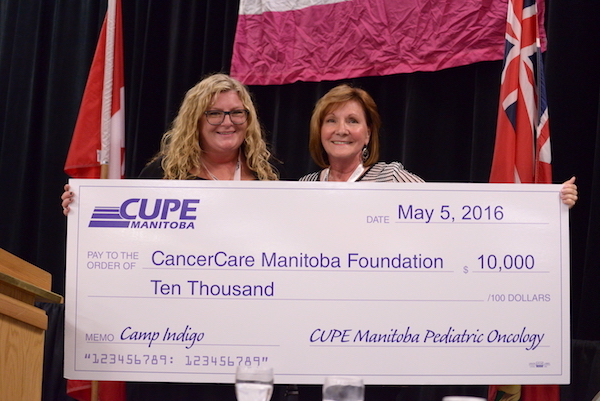 Kelly Moist, president of CUPE Manitoba, presents a cheque to Annitta Stenning, CEO of the CancerCare Manitoba Foundation, on Thursday, May 5, 2016. (HANDOUT)

The CancerCare Manitoba Foundation has received a $10,000 donation from the Canadian Union of Public Employees.

A cheque presentation made Thursday at the CUPE Manitoba Convention in Winnipeg will see funds support Camp Indigo, a camp specifically designed to provide medical support and assistance to children with cancer to make their summer camp dreams a possibility.

“CUPE Manitoba is proud to be a strong supporter of Camp Indigo,” said Kelly Moist, president of CUPE Manitoba. “CUPE members are dedicated to the community, and our involvement reaches beyond the labour movement and into the lives of children and their families in need.”

CUPE has previously donated more than $130,000 to the CancerCare Manitoba Foundation through fundraising and donations.