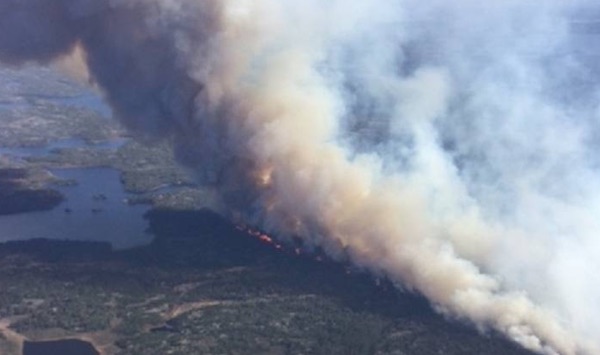 A fire burning at Caddy Lake as seen from the air. (PROVINCE OF MANITOBA)

Wildfire crews are working to contain multiple wildfires in Manitoba, including two major fires burning in the southeast portion of the province near the Manitoba-Ontario border.

Seven new fires flared up on Thursday, adding to the 45 wildfires recorded so far this year. The average for this time of year is 70.

Crews are working on fires in the following areas:
• near Lake Winnipegosis;
• near Peguis First Nation;
• near Whitemouth, assisting Whitemouth Fire Department;
• near Dauphin River;
• near the Sagkeeng First Nation, assisting its local fire department;
• east of Beresford Lake, near the Manitoba/Ontario border, Manitoba and Ontario crews with support from the Office of the Fire Commissioner, are fighting a fire approximately 10,000 hectares (ha) with the winds pushing it east into Ontario; and
• six kilometres northeast of Caddy Lake, on the Manitoba/Ontario border, approximately 300 ha. Wind is pushing the fire into Ontario, water bombers from Manitoba and Ontario worked on this wildfire yesterday evening. Ontario has taken over the suppression operations for this wildfire with Manitoba crews assisting.

The province says recent hot weather, dry conditions and high winds have increased the fire risk. Manitobans are urged to be extremely cautious and make every effort to prevent fires in their area.

Fire permits have been cancelled in the province and backcountry travel restrictions put into place as a result.