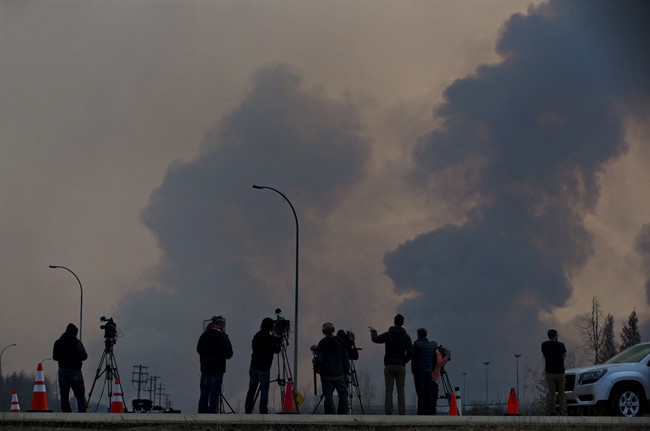 Media watch as smoke billows in the sky near a wildfire in Fort McMurray, Alta., on Friday, May 6, 2016. The Alberta provincial government, which declared a state of emergency, said more than 1,100 firefighters, 145 helicopters, 138 pieces of heavy equipment and 22 air tankers were fighting the fire, but Chad Morrison, Alberta’s manager of wildfire prevention, said rain is needed. (THE CANADIAN PRESS/Jason Franson)

WINNIPEG — Members of Manitoba’s Urban Search and Rescue (USAR) team and Canada Task Force 4 (CAN TF-4) are on their way to assist the Alberta Disaster Response Team.

Crews will be working in the Fort McMurray command centre to assist with co-ordinating the multi-agency response to the wildfire situation, as well as offer relief to other responders.

The Manitoba Office of the Fire Commissioner co-ordinates the 100-plus member disaster response team on behalf of the province. Its unit is made up of specially trained and dedicated emergency response professionals from volunteer, municipal, provincial and federal services.

The team’s primary focus is search and rescue, but members will be utilizing their other skills where needed to provide emergency response assistance.

Approximately 20 members will prepare to leave this weekend and are expected to arrive by Monday, May 9.