Assessing the Loss of Fort McMurray as Fire Rages On 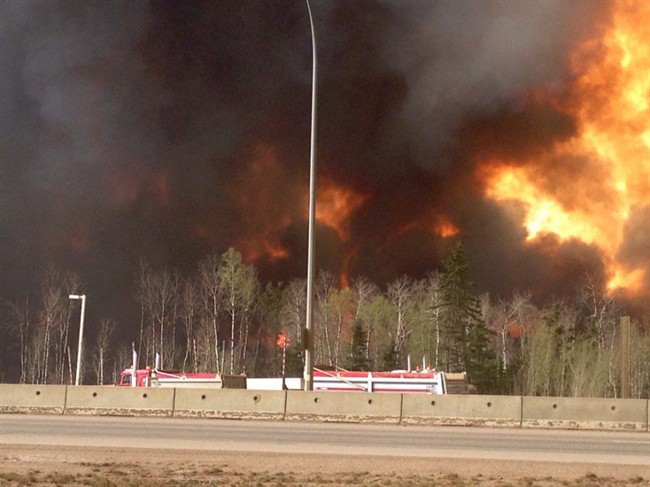 Trees burn near a road in Fort McMurray, Alberta on Tuesday May 3, 2016 in this image provided by radio station CAOS91.1. (THE CANADIAN PRESS/HO-CAOS91.1 KAOS)

What a cruel place this blessed land called Canada can be at times. Fifty years ago, the Fort McMurray area in northern Alberta was home to only 2,000 people. It has been boom and bust since then depending on the price of oil, and barely a week ago — despite the recent price collapse — the population was close to 90,000.

Then came a massive fire that can only be described as one of the worst disasters of its kind in the history of our country. Three years ago it was a catastrophic flood in southern Alberta. Downtown Calgary became a virtual ghost town for a few days because of the threat of a wall of water. How the northerners wish they had that water at their disposal right now to drown the fire and give people a chance to rest and rebuild.

Albertans and other Canadians are fantastic at pulling together when disaster strikes, but this situation threatens the entire western region. Saskatchewan, Manitoba and B.C. are not able to send nearly as much help as they would like to because their forests may be next.

At times like this, the politicians stand up and say all the right things. “Canadians will pull together as they always do, and the victims will not be left to carry the burden alone.” Tell that to some of the hundreds of flood victims in the interlake region of Manitoba who have now been out of their homes for more than five years.

Many young people from Newfoundland and other parts of Atlantic Canada settled in Fort Mac in recent years, going there in search of a life and a career. So did newcomers from the other side of the world. Many of them were leaving behind problems that were far worse than anything we see in Canada.

The greatest worry now for all who have lost their homes must be wondering if they have a future there.

Please give generously to the Canadian Red Cross.