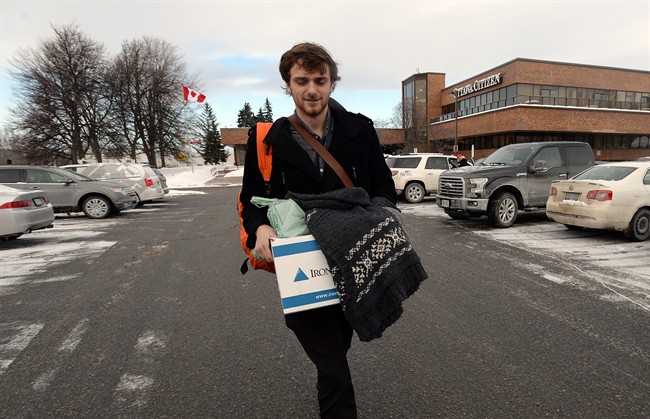 Multimedia reporter Sam Cooley makes his way to his car after being laid off from the Ottawa Sun in Ottawa on Tuesday, Jan. 19, 2016. Postmedia has cut approximately 90 jobs and merged newsrooms in four cities as it steps up plans to slash costs amid mounting revenue losses.The company owns two newspapers in each of the cities of Ottawa, Calgary, Edmonton and Vancouver. (THE CANADIAN PRESS/Sean Kilpatrick)

NEEPAWA, Man. — Culture is an important part of our lives and within the context of culture, there is the subgroup of Canadian-made content. Historically, the federal government has focused its concern over Canadian content to regulating a minimum number of Barenaked Ladies songs that must be played on the radio, funding the CBC and making sure our cable and satellite providers show enough shows featuring “Anne of Green Gables.”

But something has changed. In fact, many things have changed.

Despite all of regulators’ efforts, the way Canadians consume entertainment media has changed. In a February 5 Globe and Mail article, reporter Kate Taylor talked about a new report, which had been prepared by Nordicity, a research firm, for the annual Digital Media at the Crossroads conference. From the report, she noted that Canadians are spending about $445 million a year on Netflix subscriptions, about $22.5 million in YouTube advertising and roughly $50 million in music purchases through iTunes and Google Play. This is over $500 million in cultural spending that is being shipped out of the country, never to be seen again, never to be used to develop media, arts and cultural industries in Canada.

If that weren’t enough, regulators and legislations now have another cause for concern, the cutbacks and closures made by large media conglomerates, such as Postmedia, are threatening a different kind of Canadian content — local news coverage. Today, given Postmedia’s precarious financial position, it’s quite possible that some major Canadian cities will have no daily paper and many rural communities will also be left without a community paper in the near future. This has people worried.

Why is this important? According to Newspapers Canada, 75 percent of Canadians rely on weekly or daily newspapers for information about their community. From local taxation to high school sports, no one else is covering what local papers do — not Facebook, not Google, not even the CBC.

Taylor said that it’s estimated that $432 million in ad revenues that would have been spent with Canadian media companies is now being spent on digital platforms, the largest of which are outside the country. Individual businesses aren’t the only ones shipping their ad dollars outside of the country, governments are also shifting their spending.

In the 2014-2015 year, the federal government spent a total of $49 million on media advertising. Of that, $27 million was spent on television, followed by the Internet, at $13.9 million. Community papers accounted for $3.2 million in spending, while dailies and national papers accounted for just $357,000. Since 2010, the amount of advertising dollars spent by the federal government on internet advertising has been climbing, while that spent on print ads has been declining. This is despite the fact that papers continue to provide the news Canadians are looking for.

Newspaper coverage isn’t an end unto itself, in many cases, it opens the door to further conversation. How many blog posts are based on a news story? How many Facebook posts link to something from the news media?

Perhaps this is why newspapers have been included besides CBC and others, in the federal government’s “Strengthening Canadian content creation, discovery, and export in a digital world” consultation. It’s time to recognize the value of the unique content created week-in, week-out by local media. For those interested in Canadian content, of any kind, a “pre-consultation” questionnaire is available online until May 20. The second phase of consultations will take place later this year.