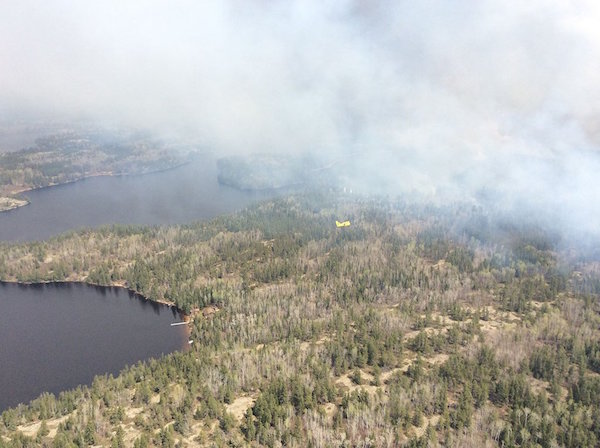 A fire near the Manitoba/Ontario border has increased to nearly double in size within the last 24 hours.

The wildfire northeast of Caddy Lake is now 5,100 hectares. The east shore of Caddy Lake in the Whiteshell Provincial Park is closed until further notice and evacuation orders remain in effect.

Ontario officials are continuing to lead the operations to control the fire.

The Beresford Lake fire has increased to approximately 56,000 hectares. Sprinkler protection continues on cabins in the area. The mandatory evacuation of the Beresford cottage subdivision of Nopiming Provincial Park continues.

Water bombers are continuing to make rounds of the area and approximately 100 officials are working to protect cabins and property in the region.

An evacuation order remains in effect for Wallace Lake, which affects 61 cottages and one lodge. Officials are monitoring conditions at Long Lake closely.

The Beresford and Wallace lake campgrounds are closed until wildfire conditions improve.

Meanwhile in western Manitoba, burning permits are cancelled in the Turtle Mountain and Spruce Woods provincial parks as well as the area from the west shore of Lake Winnipegosis to the Saskatchewan border including the Duck Mountain area and Porcupine Hills north to the Overflowing River. No new permits will be issued until conditions improve.