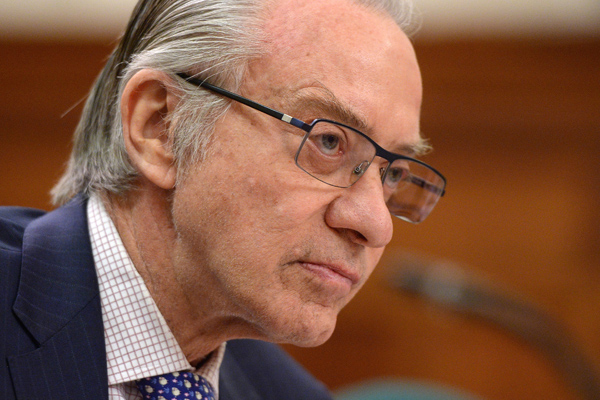 Postmedia president and CEO, Paul Godfrey, appears at commons heritage committee on Parliament Hill in Ottawa on Thursday, May 12, 2016., to discuss the media and local communities. (THE CANADIAN PRESS/Sean Kilpatrick)

OTTAWA – The head of one of Canada’s biggest media empires is calling on Ottawa to spend more on Canadian newspaper ads, and to give greater tax breaks to companies that do the same.

Postmedia president and CEO Paul Godfrey made the plea Thursday to a Commons committee examining the future of the country’s struggling local media.

“Come back and advertise in our newspapers and on our websites,” Godfrey pleaded, noting that government cuts to advertising in recent years have disproportionately affected newspapers.

“We’re asking the government to be an ally, not for a bailout of the Canadian newspaper industry.”

Godfrey pointed to federal statistics showing government advertising in newspapers was halved, while online advertising nearly doubled, between 2010 and 2015. The bulk of the money went to foreign-owned behemoths like Google and Facebook, which produce no original Canadian news content.

He called on the government to explore ways to encourage Canadian businesses to advertise locally, through higher tax write-offs for firms that buy ads in Canada.

Godfrey also suggested Heritage Canada’s Aid to Publishers program be expanded to include daily publications and community newspapers, saying it could help support the creation of local news content.

Godfrey warned that, without added revenues, many local news outlets will likely be shuttered in the next three years.

The Liberals on the committee were quick to accuse Godfrey of contradicting himself. Postmedia has been among the strongest critics of government spending on advertising, said Liberal MP Adam Vaughan.

“There have been no fiercer critics of subsidies to the media than the Toronto Sun and the National Post,” Vaughan said of two of Postmedia’s flagship papers. “How do you square your editorial position with your corporate position?”

Godfrey responded by saying Postmedia columnists are given leeway to write articles that contradict their own company’s positions on political and other issues.

Vaughan also questioned why taxpayers would want to bail out a failing company that is owned in part by a U.S. investment group.

Postmedia was formed in 2010 when the Canwest newspapers were bought while under court-supervised credit protection by an investment group backed by New York hedge fund Golden Tree Asset Management for $1.1 billion.

Last year it grew to become the largest newspaper chain in the country when it paid $316-million to buy Sun Media’s English-language news properties, including 175 newspapers and digital publications, notably the Sun chain of papers in Calgary, Edmonton, Toronto, Ottawa and Winnipeg, plus The London Free Press.

The deal also included the free 24 Hours commuter dailies in Toronto and Vancouver, the English-language Canoe online portal and more than a million square feet of real estate.

But the sale also saddled Postmedia with massive debt obligations.

Godfrey told the committee that, while his news properties would benefit from government support, he was pitching the recommendations on behalf of Canadian newspapers at large, not just his own company, which he noted is still Canadian-controlled.

The Liberals also bought up the home page of the National Post’s digital operation during the campaign, Godfrey pointed out.

“I’ve seen some recent trends where you’re trying to do almost a Metroland model of centralizing editorial control,” the York-Simcoe Ontario MP said.

“I warn you that I think that will harm some of your long-term competitive advantage.”

Postmedia announced sweeping changes to its operations in January, cutting 90 jobs across the country and merging newsrooms from multiple newspapers into one each in Vancouver, Calgary, Edmonton and Ottawa.