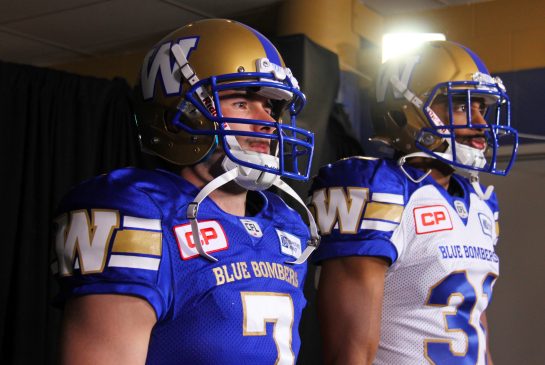 The Winnipeg Blue Bombers unveiled their new jerseys Thursday, and the praise for the new design was led by teammates.

“They look great,” receiver Weston Dressler told bluebombers.com, who modeled the new (old?) royal blue home jersey at Thursday’s uniform launch. “I’ve always enjoyed the royal blue playing against Winnipeg, but I think adidas did a really good job with the design and everything. And they feel good, too.”

“As a player you want something you can move in and feel good in as you’re playing. And, obviously, fans like you to look good, too. Most of the players will tell you they want to look good as well. They did a good job with all that.”

The return to the classic Winnipeg Blue Bombers royal blue is offset by a gold stamp around the numbers and the return to white away jerseys.

“My eyes lit up when I saw the white jerseys,” said Bomber defensive back Maurice Leggett. “And the royals… it’s a great colour and I loved wearing them, especially for the Banjo Bowl.”