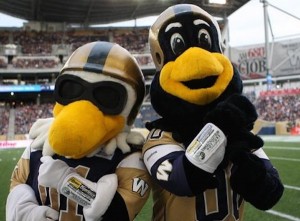 The Winnipeg Blue Bombers are once again inviting fans to Investor’s Group Field for the annual Blue Bombers Fan Fest.

Fans can partake in a variety of activities on Saturday, May 14 from 9 a.m. to 5 p.m, including free hotdogs, inflatable games, a photo booth and the True Blue Tattoo Station.

Andrew Harris, Maurice Leggett and Rory Kohlert will also be showing off the new jerseys unveiled on Thursday while signing autographs with alumni players.

Season ticket holders are invited to pick up their season tickets in the Pinnacle Club during special pick-up times over the weekend. After the weekend, fans can pick up tickets at the Ticket Centre at the Bomber Store during regular hours.